Some of my thoughts and pictures on adding auxiliary lights on "Endeavour", a '93 BMW R100 GSPD, while staying below a self-imposed budget of $200.

Now that the pesky final drive oil leak appears to be fixed, I will move on and install some auxiliary lights.  A few months ago I replaced the stock headlight with an H4 R3 LED unit, it is great but still not sufficient (high beam is - low beam driving light in my view could be better).  Sep. 2017 I decided to leave my home in Annapolis for the Finger Lakes BMW rally at 9pm, and rode through the late night to arrive early morning at 02:30am.  Often I was the only vehicle on the road, the many deer carcasses reminded me to get some more lights mounted on this bike, since it might become the bike that gets the nod over others that have taken up residence in my garage.

I used to have a set of PIAA 55's on my K1100LT, those were excellent for night time riding.  It appears that the LED light market has quite a few offerings, will go that route since I'm not in the mood to upgrade the 280W charging system yet, so keeping an eye on the consumed wattage will be important.

Of course, lights and switches should also be water-resistant so I'm trying to satisfy an IP-68 or IP-69 rating.  Our good friends from China have a few offerings on the eBay market that peak my interest.  I also checked out Clearwater, Twisted Throttle, Baja Designs, Advmonster and Touratech, most of their offerings range between $950 and $200, while I'm certain their products are great, are they better by several hundred dollars?

We will see ...  I don't tend to ride that much at night anymore, these lights will primarily serve as daytime running lights.  I also want a mixture of LED's and at least one good ole' Halogen "spotlight", in case I were to lose the main headlight and needed a precise beam pattern.  So the fun begins.

I had high hopes for this set but realized the limited install possibilities with the "built" in brackets not being adjustable enough for the roo bar install location. Gave up on these fairly quickly for the GS, might be able to use them on another bike.  $19.50 just squandered away - lol.

Two considerations here:  A.  This light could serve as a work light, and will be installed with that in mind (i.e. easily detached with hopefully some excess cabling) to use the light to help a friend in need, etc.  Will probably be wired directly to the battery and operated with an on/off switch. B. This light bar will emit a light pattern other than the regular "round" headlight look, hopefully a person will do a double-take to figure out "What is THAT coming at me?" If that is the case, then this project was successful.  Not bad for $15.79, although I will probably only use one, or have the second light already ready to go with connectors and a long cable ...  ideas, ideas ...  Simple plug and play, not having to dismantle the existing light bracket!

One set of lights should be installed on the 1in diameter roo bar, since this set also includes the mounting hardware (which is fully adjustable), this will be a fairly straightforward install. These also claim to be "More Than Brighter" - what a deal for $62.05. 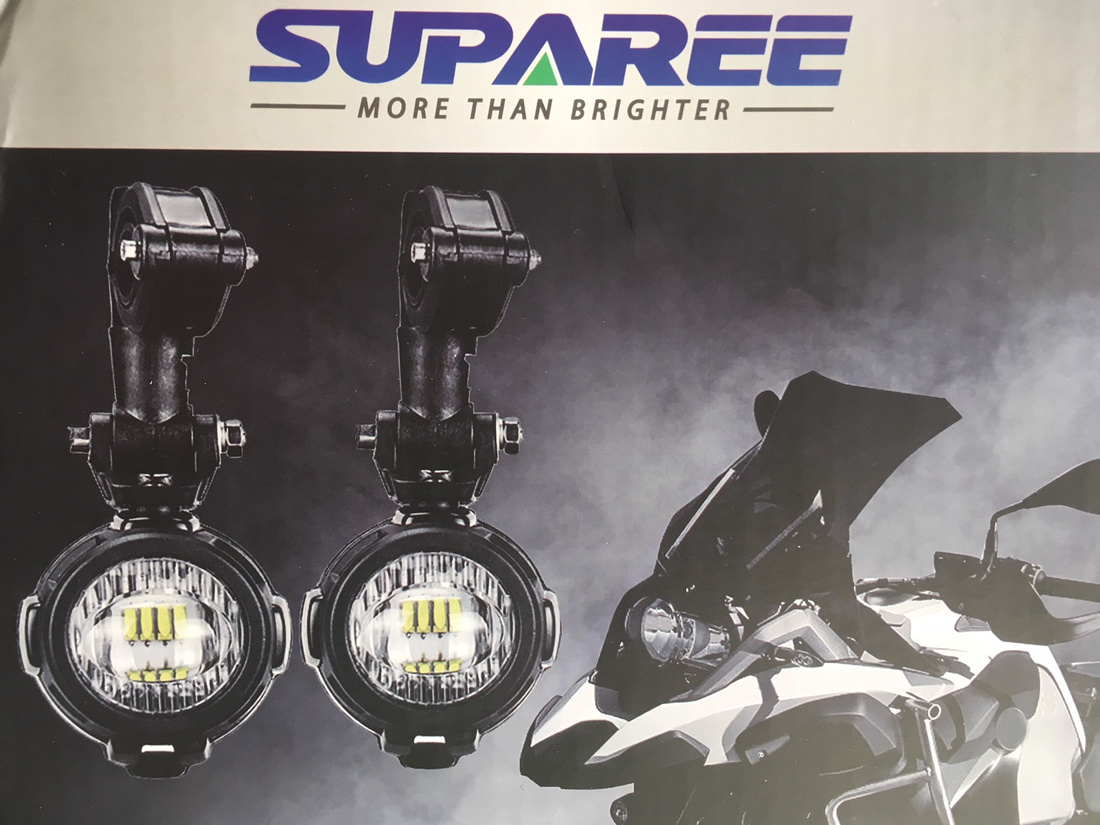 I'm not certain that these will be powerful enough for nighttime riding.  I will update this thread as I move along.

Tying it all together: Unbranded, 12V 40A Harness Wiring Loom with Relay and switch

I ordered 2 of these, one with a red switch, the other with a blue one.  This harness has 10ft of wire, each has it's own relay with fuse. I plan to shorten the wiring looms for a "custom" fit, no need to stow several feet of unneeded wire. The two wiring looms were $17.52. 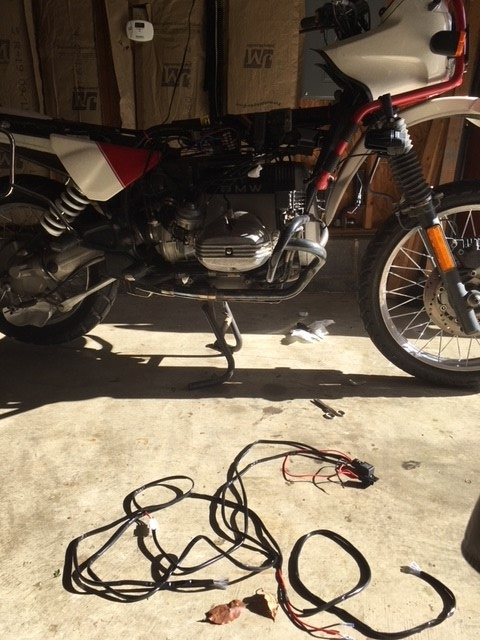 During the 2016 winter i installed a voltage indicator utilizing a relay and a power distribution terminal strip.  Since the voltage indicator is a simple LED drawing virtually no amps, i should be able to run at least one set of lights tied to the existing distribution block housed under the tank. The Voltage indicator is slick, the single LED will turn Red when Battery is draining (at idle), and turn yellow when the system is overcharging.  During normal operation the LED is not illuminated. 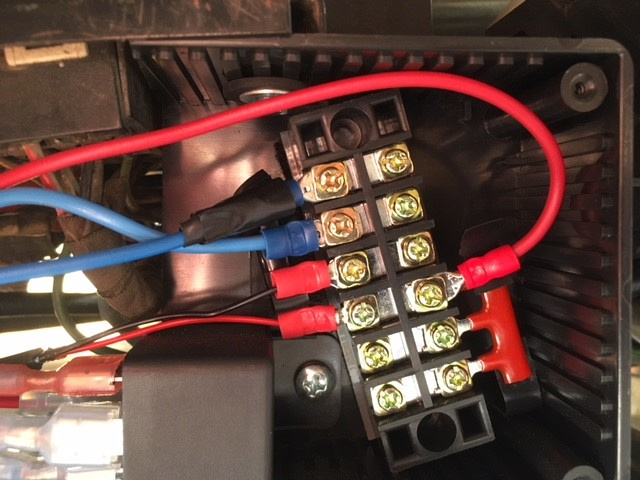 I had to order a bracket to properly mount the 6in LED light bar on the crash bar, so there went another $7.  I ended up purchasing another light to be installed on the opposing side (also on the crash bar) this light being a somewhat traditional round rally light: KC 1490 Hilites 4" Rally 400 55W Halogen

This presumably will be my night time running light with 40000 candlepower.  Coupled with the H4 R3 LED headlight on high beam, and the 6in LED light this should provide plenty of light.

So in November 2017 I finally headed into the garage to work on getting these guys mounted and wired up. Installing the first set on the roo bar, getting it all wired up, and right of the bat one light does not work ...  Great.  Checked and rechecked the wiring, without doubt the issue is with the light. This "More Then Brighter" claim appears to be a farce. 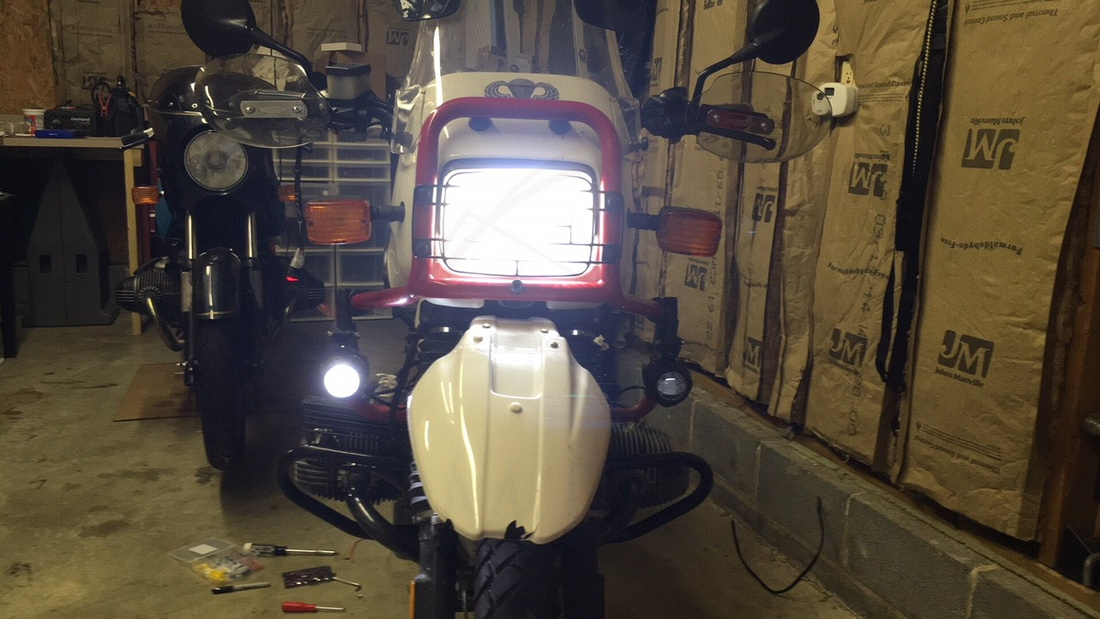 After a short email exchange I had another light shipped to me, no cost to me, of course since it is coming from China it took a little while to arrive.  This gave me plenty of time to decide on how to mount the light switches and to start trimming up the 15ft of each wiring harness that is clearly overkill.

The install itself was fairly straight forward.  With all lights illuminated, here is what I get. 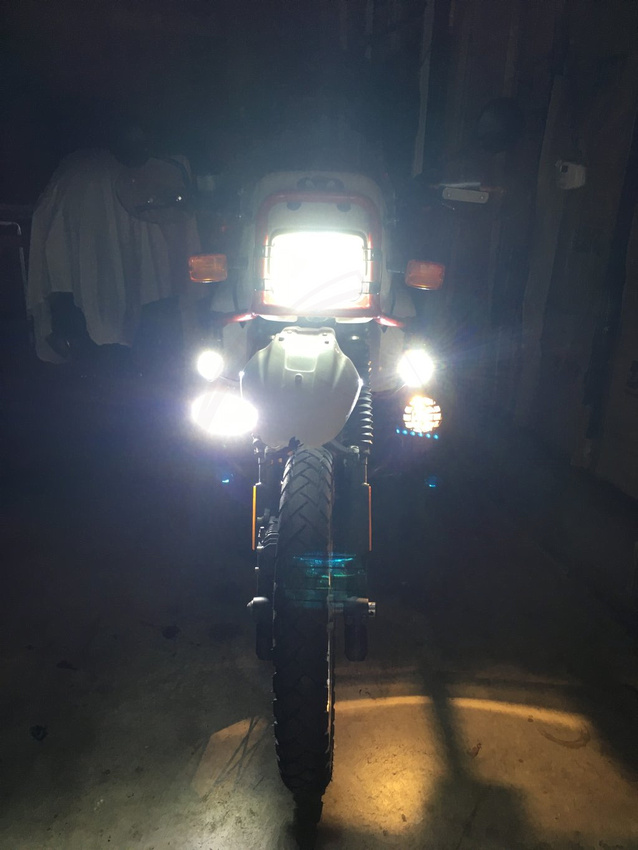 I came up with a pretty neat housing for the light switches themselves.  It essentially is a plastic electrical conduit junction box that cost maybe $4.00. The official name in Home Depot's inventory has it as a "Carlon 2in Schedule 40 and 80 PVC Type LR Conduit Body".  The round light switches on the two wiring harnesses I used fit absolutely perfect.