Todd and Laura once again invited some BMW motorcycle enthusiasts to their homestead in Harleysville, PA.  We once again celebrated the 40th Anniversary of two of Hans Muth inspired BMW models, the R 80/GS and the R 65 LS.  Hans Muth, George "Schorsch" Martin, Udo Gietl, Dr. George Frazier, Tom Cutter, Bob Henig, Karl Meyers and Armond Ensanian were in attendance and also presenters for various sessions. The number of R 65 LS's on hand was astounding. Never seen so many in one location. Met so many new friends and reacquainted with old ones. It was an Epic event.

I packed up the '93 R 100 GSPD and headed towards Harleysville, taking the scenic Eastern Shore ride from Annapolis, MD. Packing the bike was a bit of a challenge, considering I took 3 cameras and the associated batteries, chargers, to take photos of this event. Of course I packed a few malted beverages so Endeavour was loaded down a bit. I felt quite a bit of buffeting that I don't get on my Triumph Tiger, might have to get a bigger wind screen after all. Admittedly, the ride was felt more solid on the ride home with malted beverages having been properly disposed off days prior. 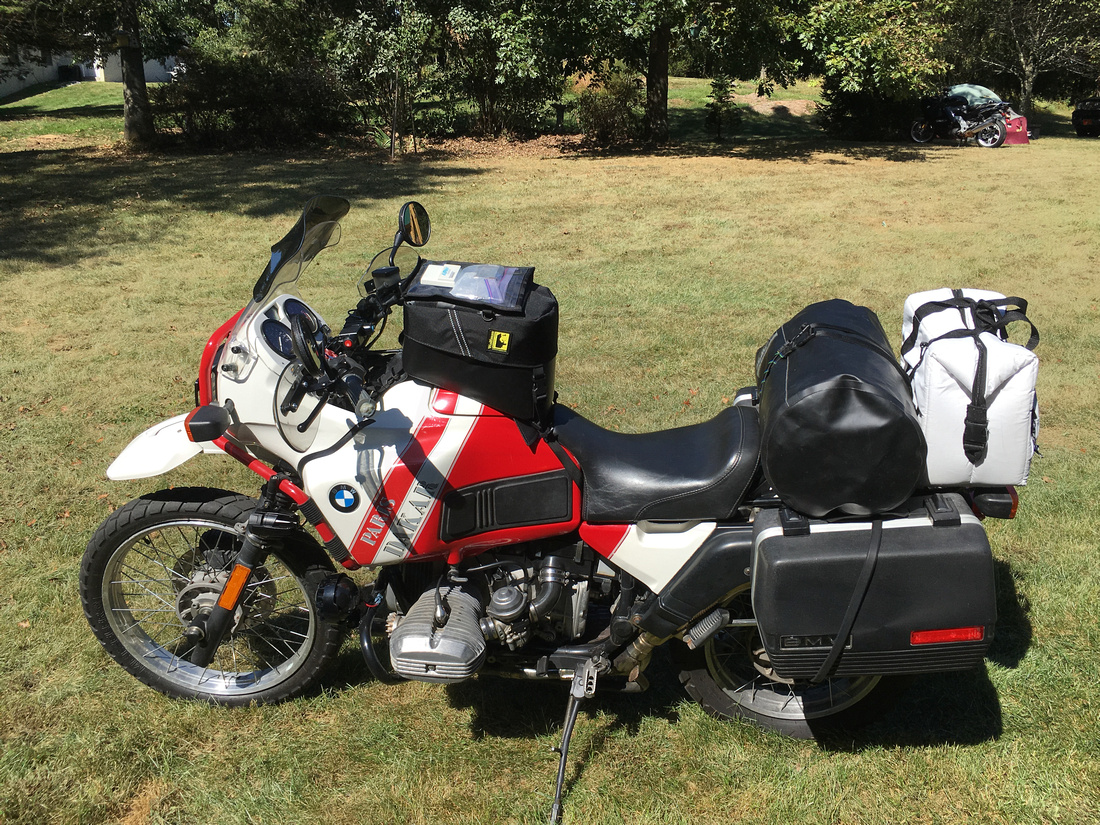 Arrived at Todd's, checked in with Laura and Ken, setup camp while enjoying a cold beer. RJ soon arrived, we hung out while he setup his tent next to mine and we had a chance to get caught up on things. Pretty sure it was Hot Dogs and Chili for dinner, met up with more good friends and had a nice evening by the fire. Dave Good and I looked at so many old rally photographs he has digitized and on his phone.  I saw quite a few of Unca Norm and his R100RS "Leiser Blitz", which has been in my possession for a few years now.

Friday morning Hans and the entire entourage arrived,  we all were treated to Todd's ribbon cutting ceremony for the Dedication Ceremony of the Bavarian Bike Barn.  Hans cut the ribbon, and we all got to follow Hans in to see the AMAZING effort Todd and team has put into displaying the many bikes Todd has in his collection. One would not believe the transformation of the barn from two years ago. 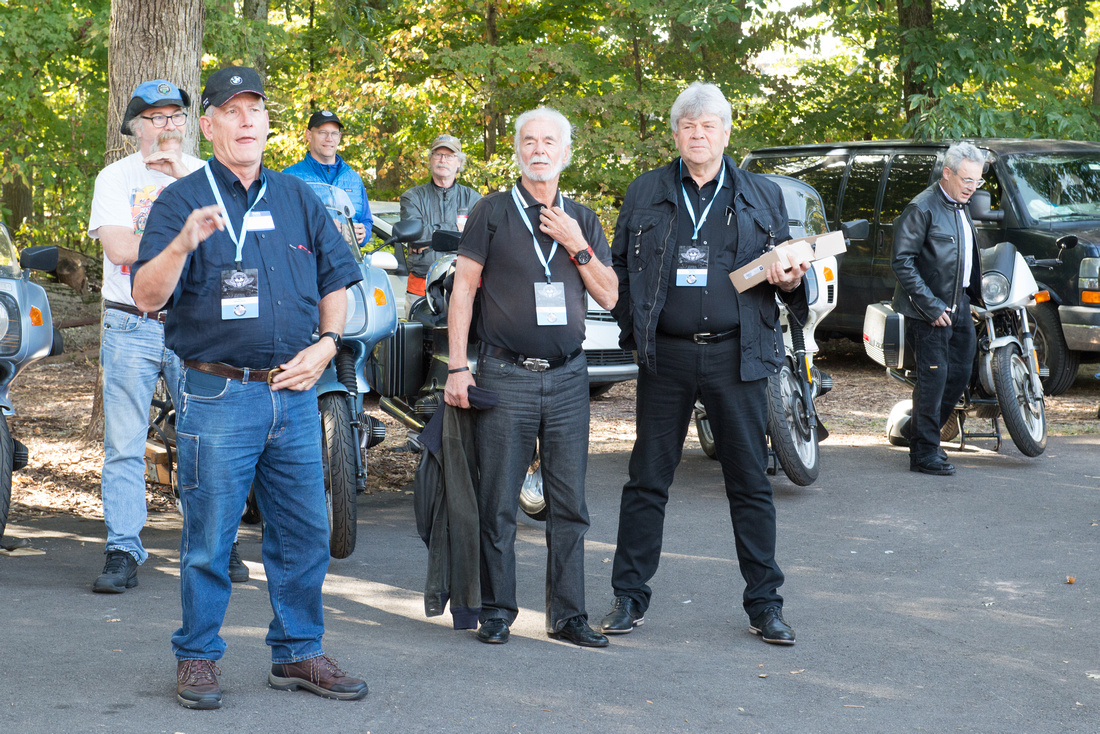 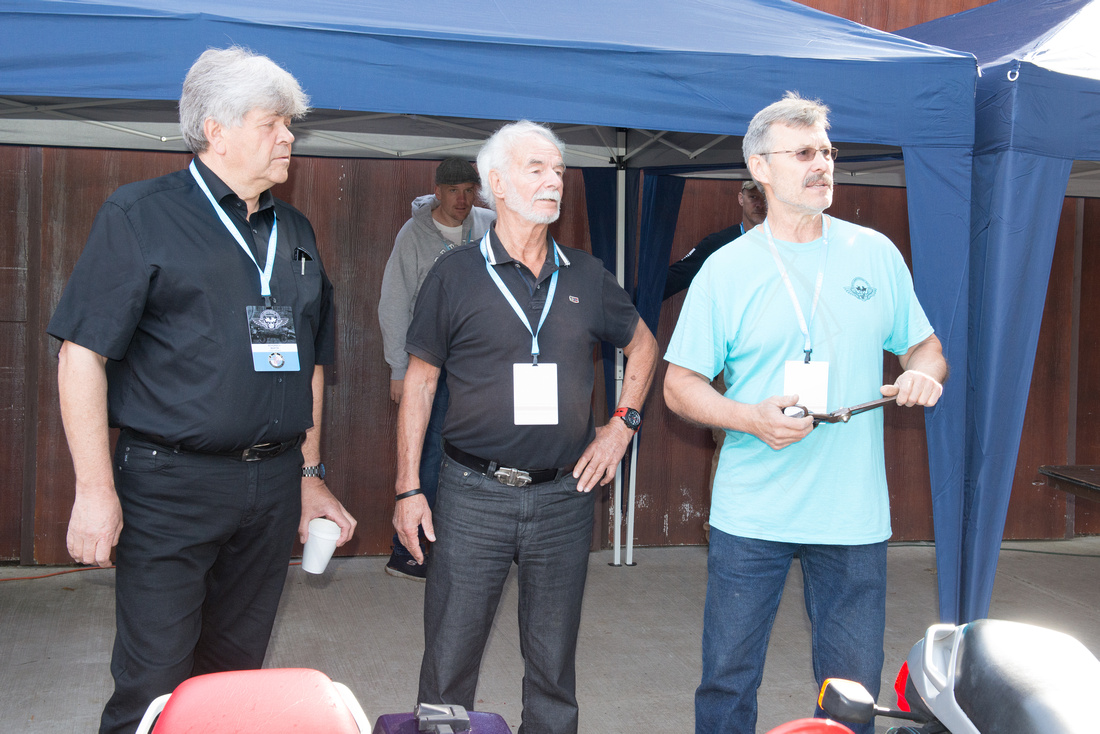 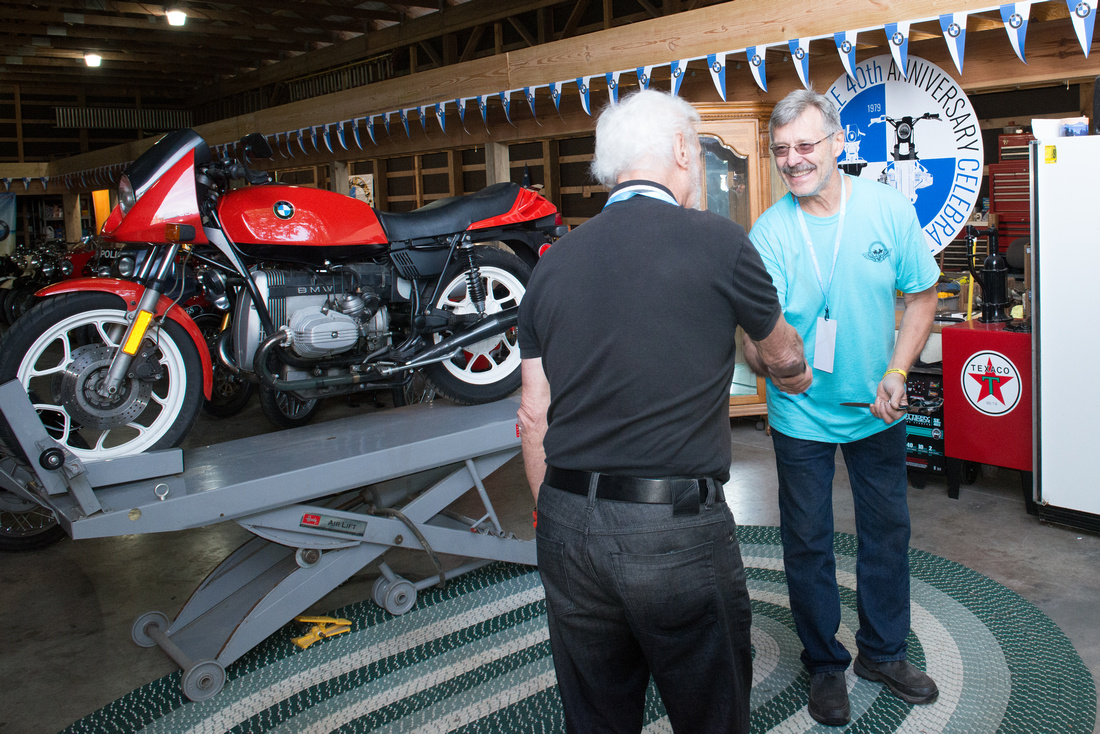 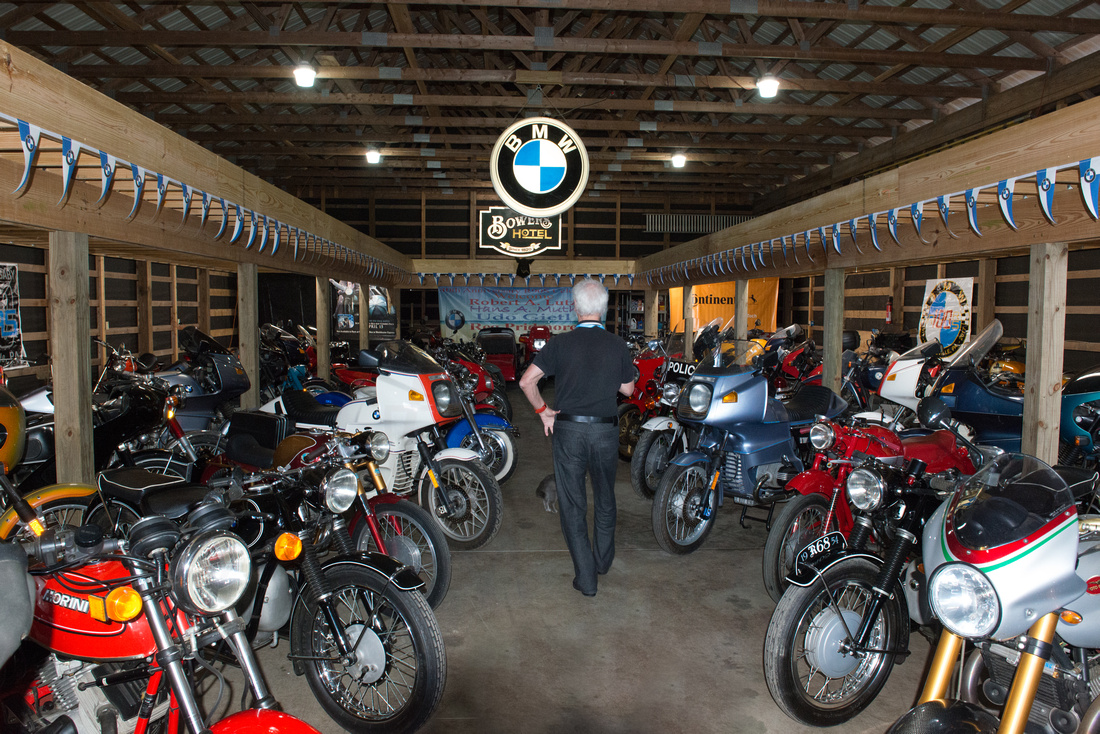 The day proceeded with Hans giving a great presentation on the overall design concept of the R80/GS. It soon became apparent why Schorsch (owner of the largest BMW Dealership in Germany) was attending this event. I do hope that I'm reciting Hans properly here .... in a nutshell: Hans left BMW and therefore was not able to see his R80/GS go into full production without his further guidance on the final design.  Schorsch and Hans have worked on the GS800 - THAT is what Hans envisioned for the R80/GS.  When Hans and Schorsch unveiled the GS800 in front of all of us there was a palpable gasp coming from the audience. Frankly, this bike is "stunning", it is what BMW should have built.  Schorsch's Dealership will build one of these for you! Oh my, that is tempting .... 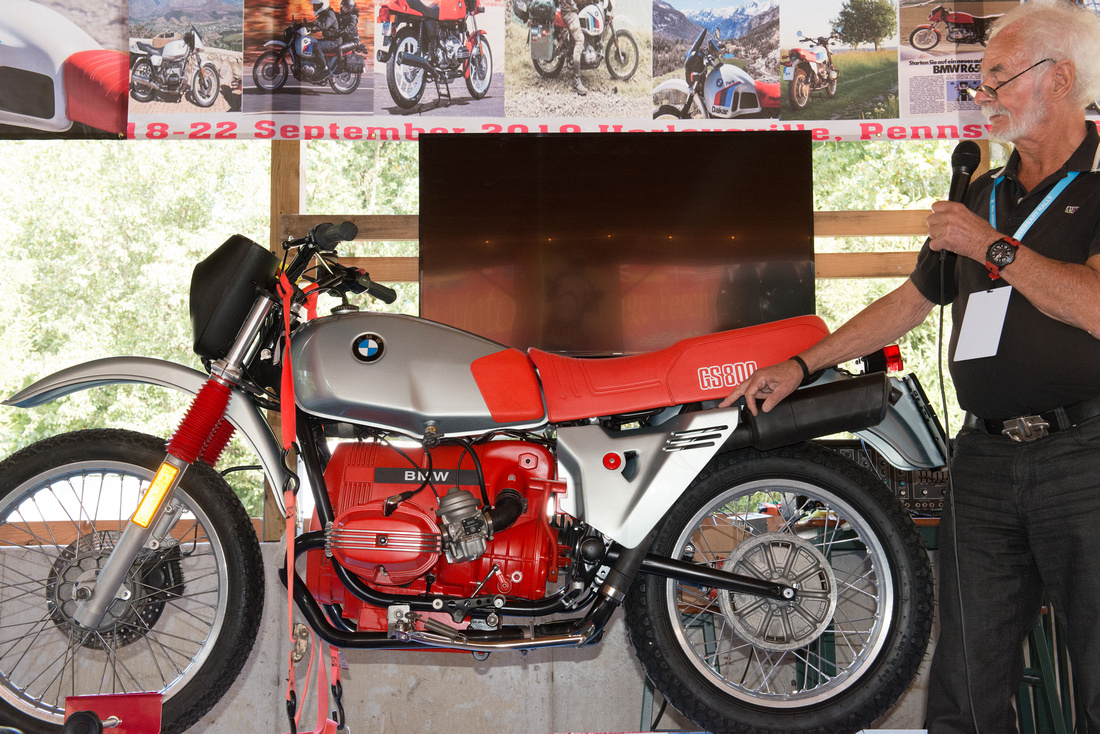 Dr. George Frazier gave a great presentations on his numerous" Travel Around The World" experiences.  How one has the stones to make this happen is beyond me.  Wish I could do that.  The memories one surely gathered have to be priceless. Greg used an R80/GS he calls "Ugly Helga" during some of these travels. Quite the machine. 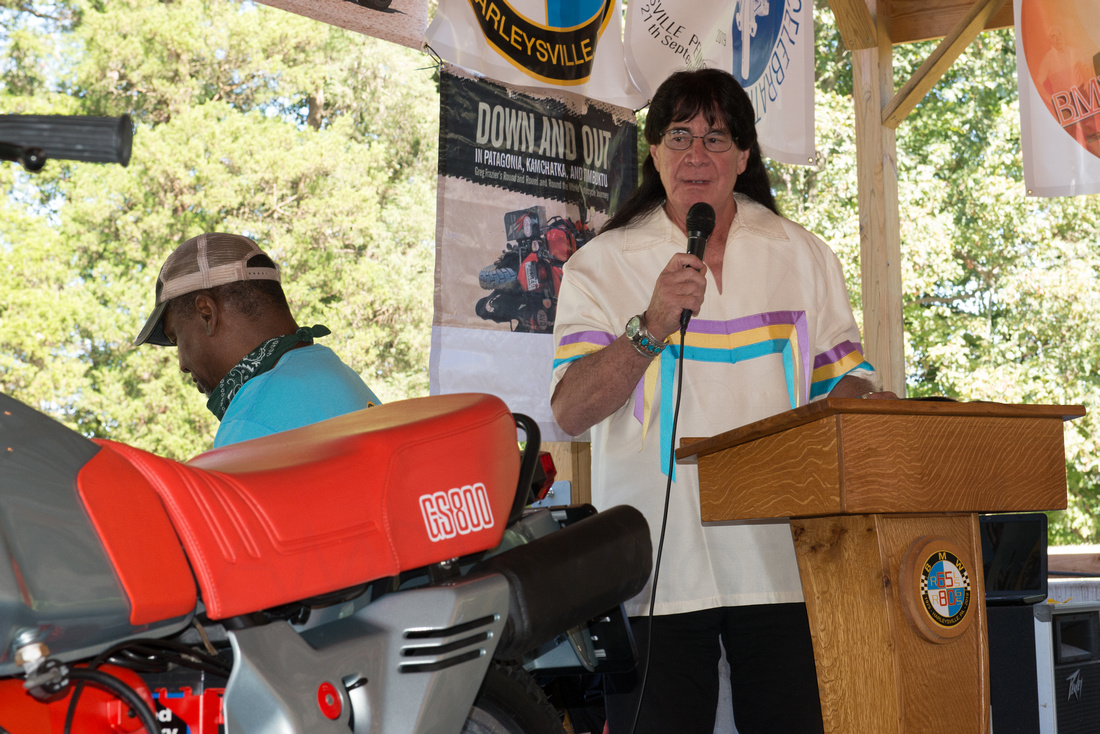 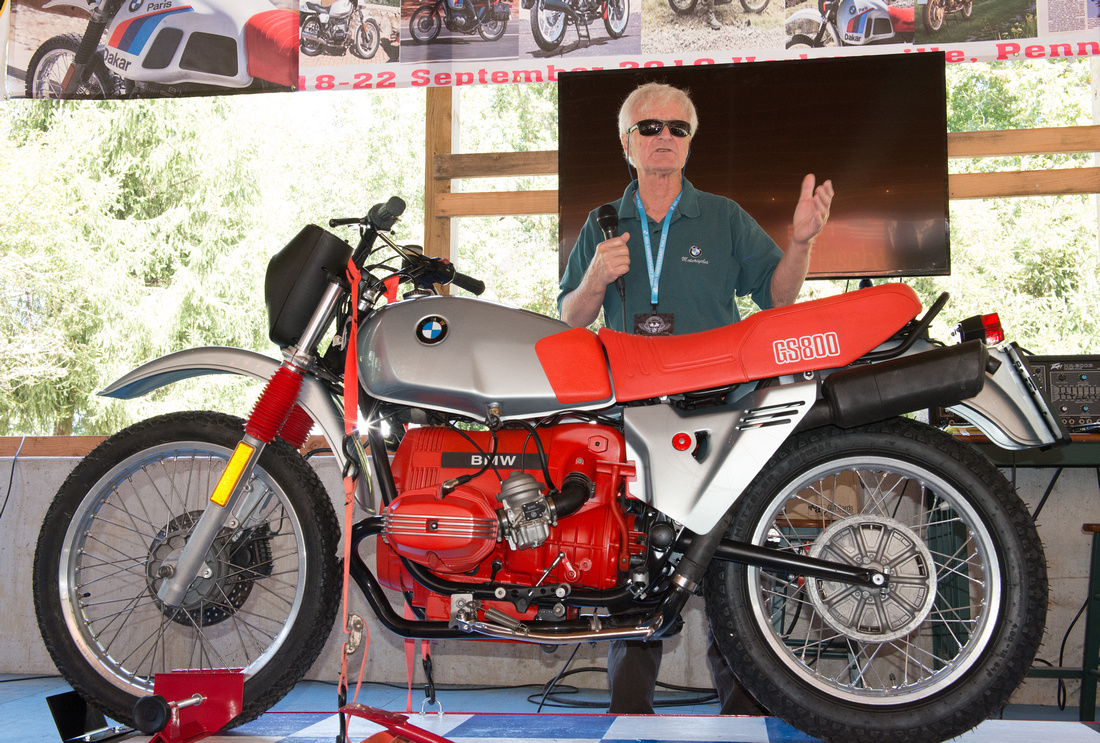 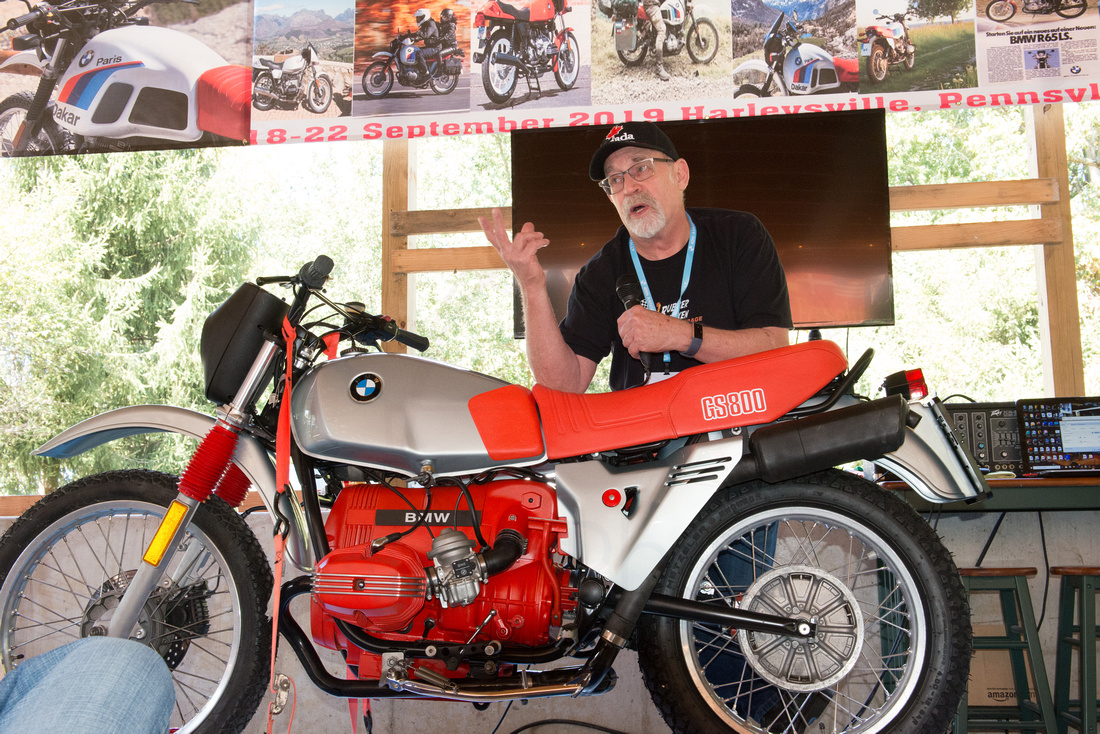 Later in the afternoon Hans signed autographs and talked to many of the enthusiasts present.  I can only wish to have his stamina when I am in my 80's. 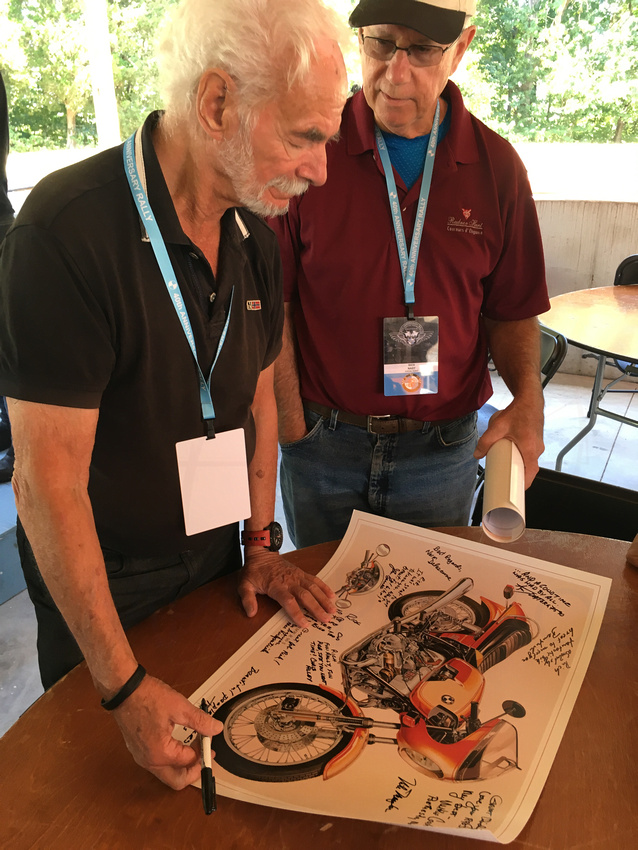 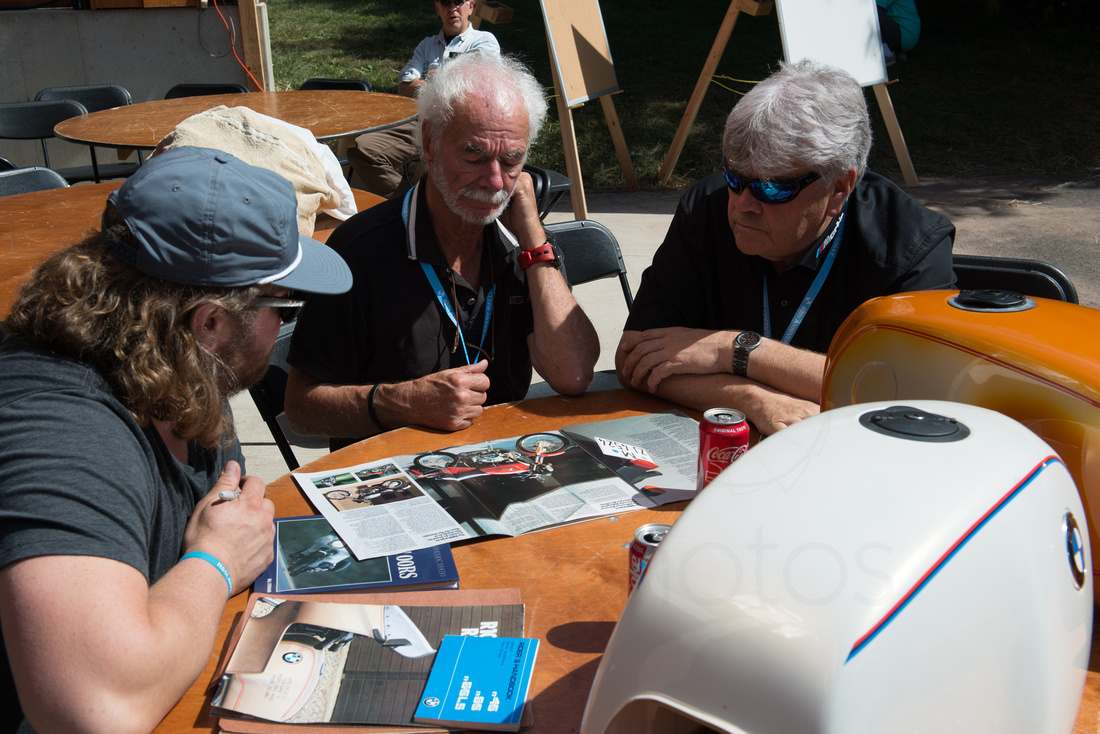 We had a fantastic catered German inspired evening meal.  The evening/night was spent drinking good whiskey around the fire.

Saturday morning we started with paying special homage to Rocky. Rocky was in search of an R90S, of course with Karl Duffner's involvement, finding a suitable copy took some time.  When he finally got his R90S, he wanted Todd to organize a R90S "Day of Camaraderie". So in 2014, we had the first 40th Anniversary event and they seemingly get more incredible each year. Thank you Rocky for wanting an R90S!  Thank you Karl for helping him find one.  Thank you Todd for tying this altogether! 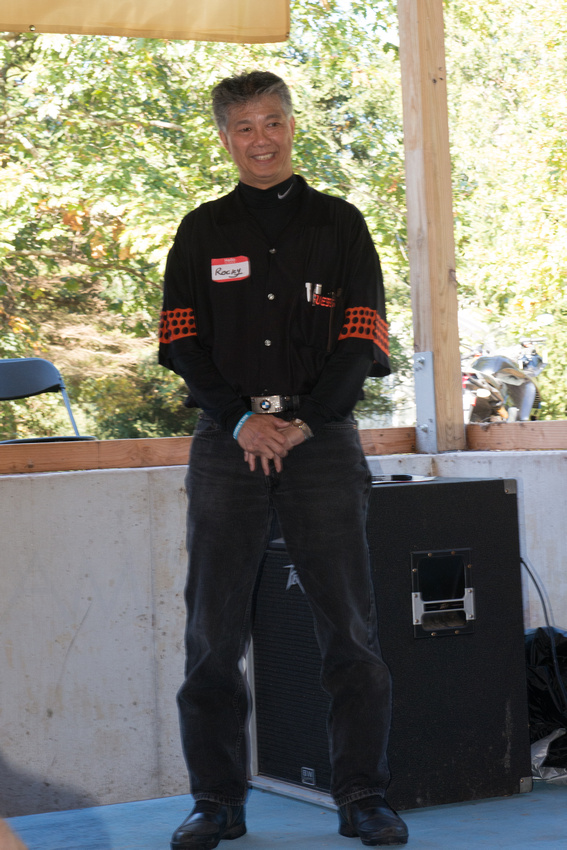 The festivities proceeded with another presentation given by Hans about the R 65 LS and what decisions led to its' design.  It was a great presentation, Hans outlined the many interesting design features we sort of take for granted I suppose.  Hearing Hans point these out, makes me view this bike in an entirely different light. 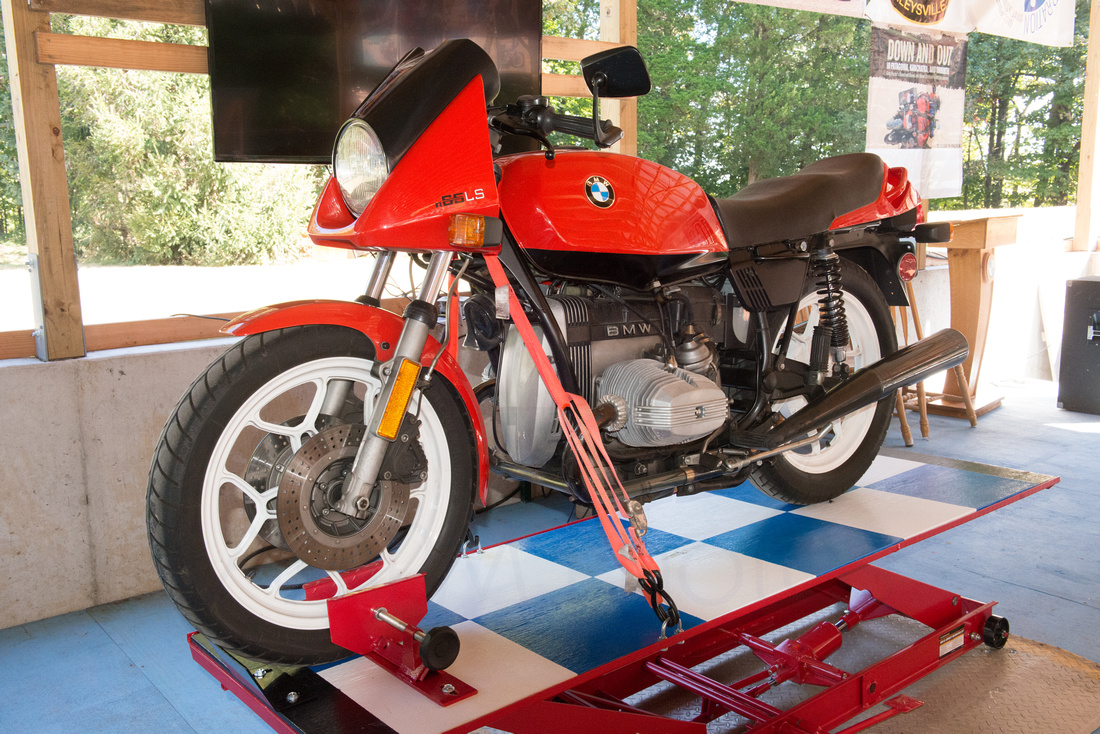 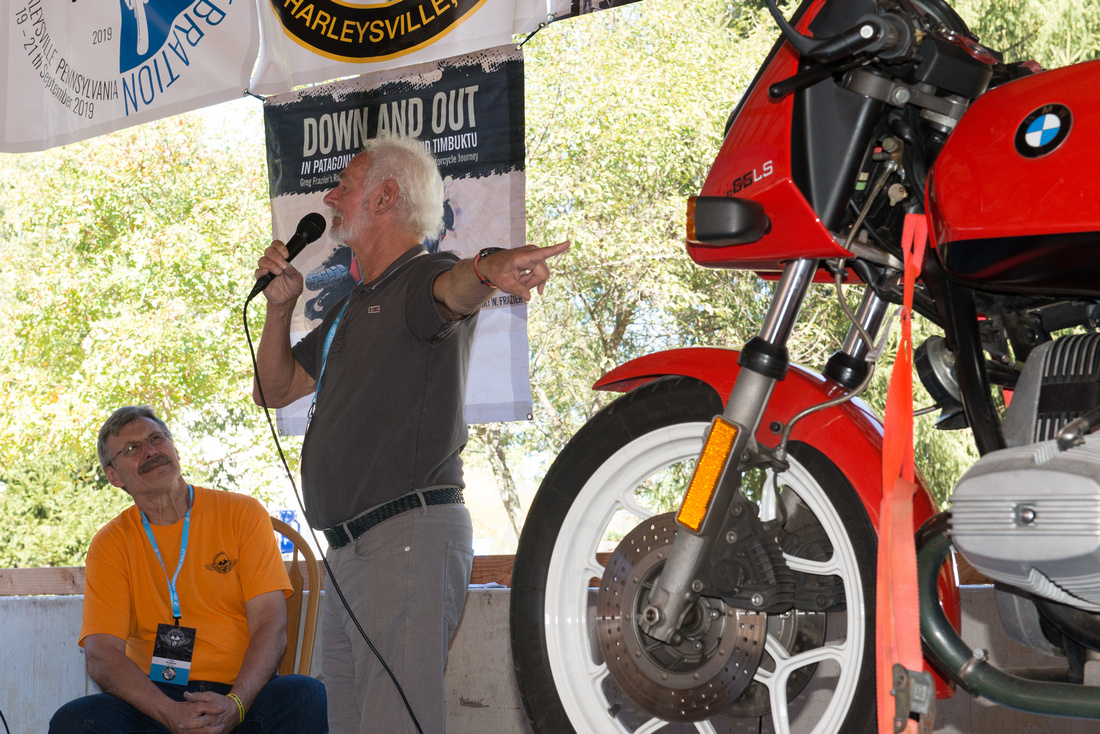 There were more presentations during the afternoon, most notably by Tom Cutter, Karl Meyers and Armond Ensanian. 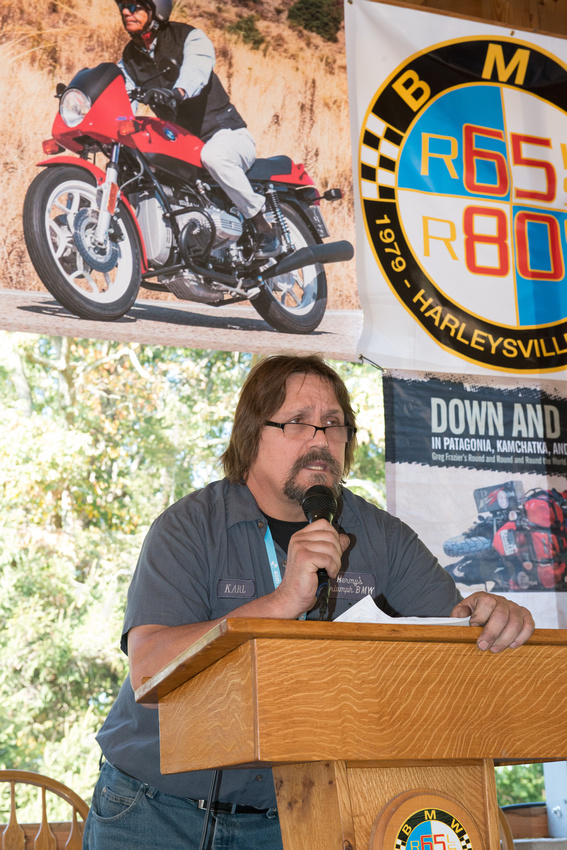 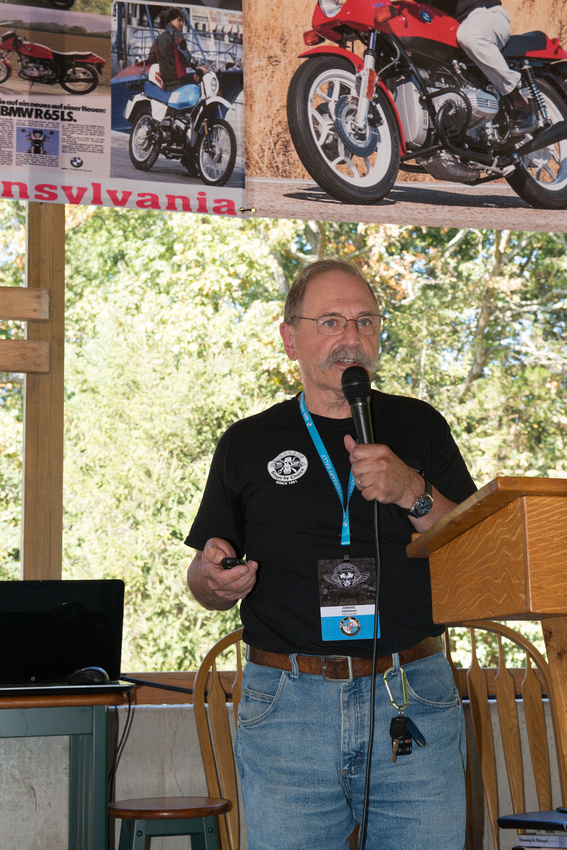 We also managed a photo shoot with Hans and Schorsch, the GS800, a beautiful R80/GS owned by Dave and an R65LS were placed near the fire pit which provided a pleasing backdrop. Schorsch being ever playful wanted to give Hans a ride on the GS800, those would have been some great shots! 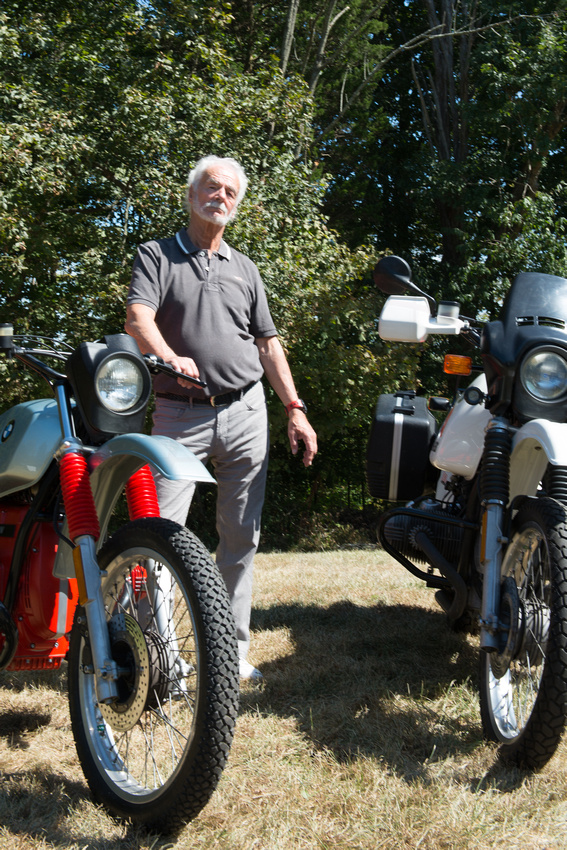 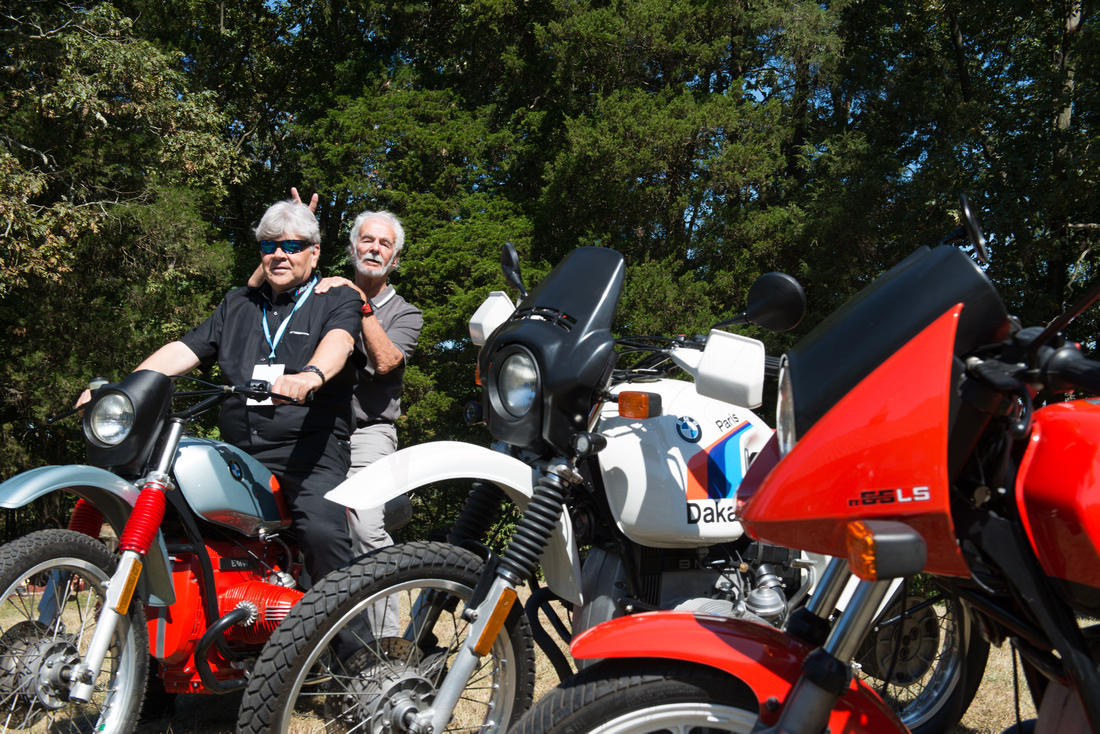 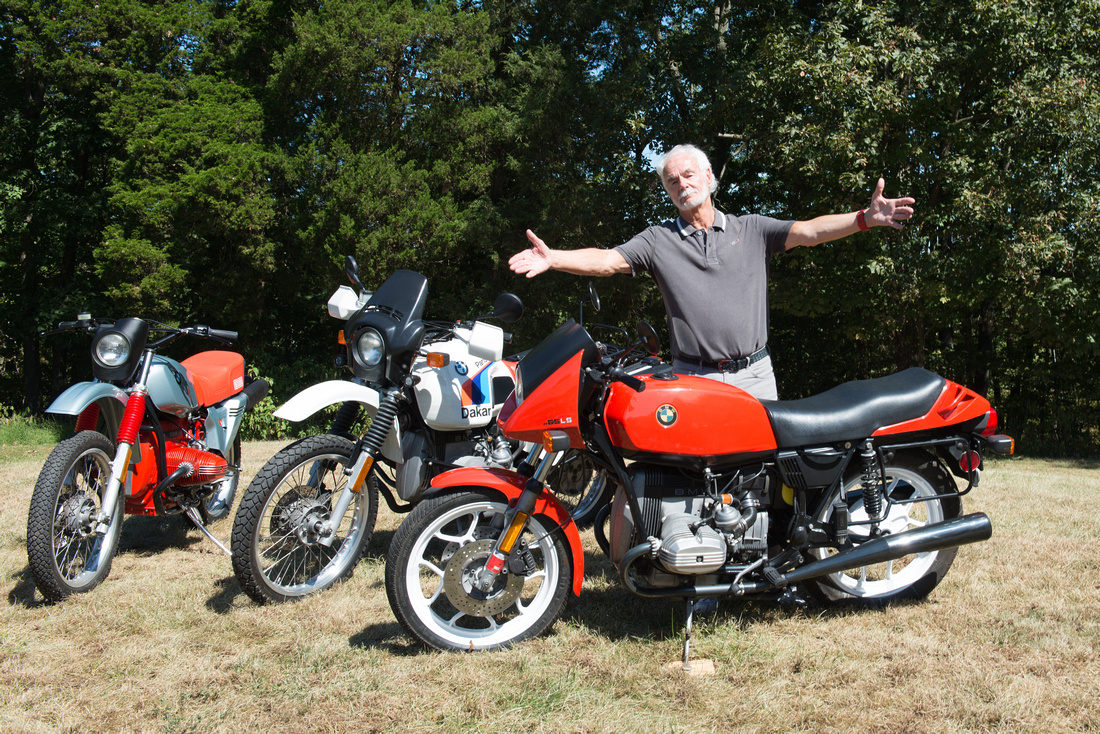 The rest of the day was spent with hanging out with our special guests.  More autographs were signed, machinery looked at, beverages consumed, friends' made.

I was able to sneak Hans away for a bit, so we could hang out with RJ and take a few photos (photo credit goes to RJ) 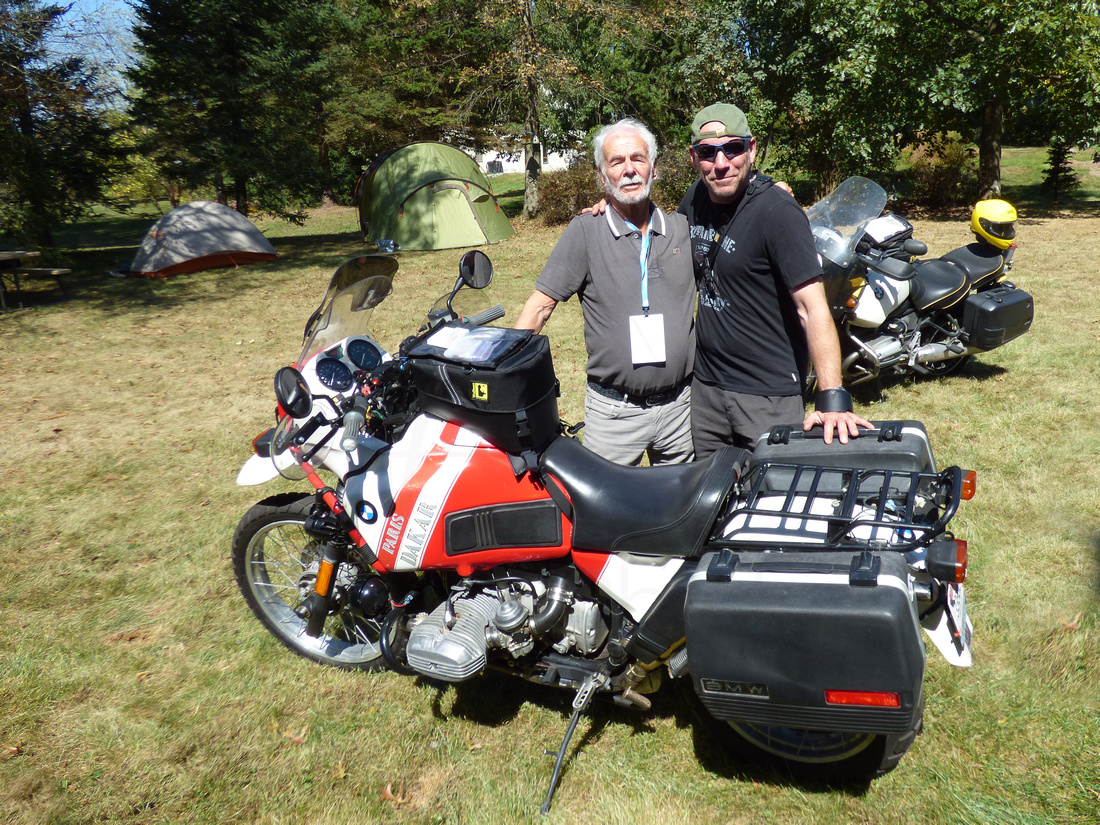 I got to fly Dave's drone with his supervision, while RJ wrenched on his bike for a bit. 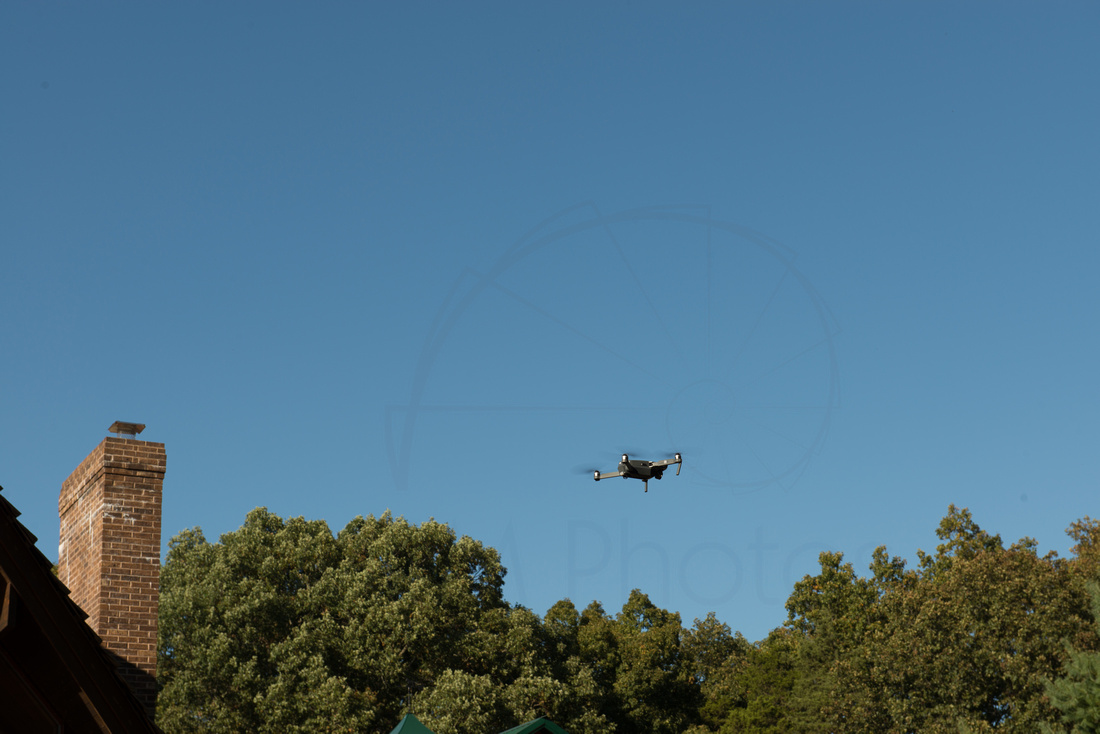 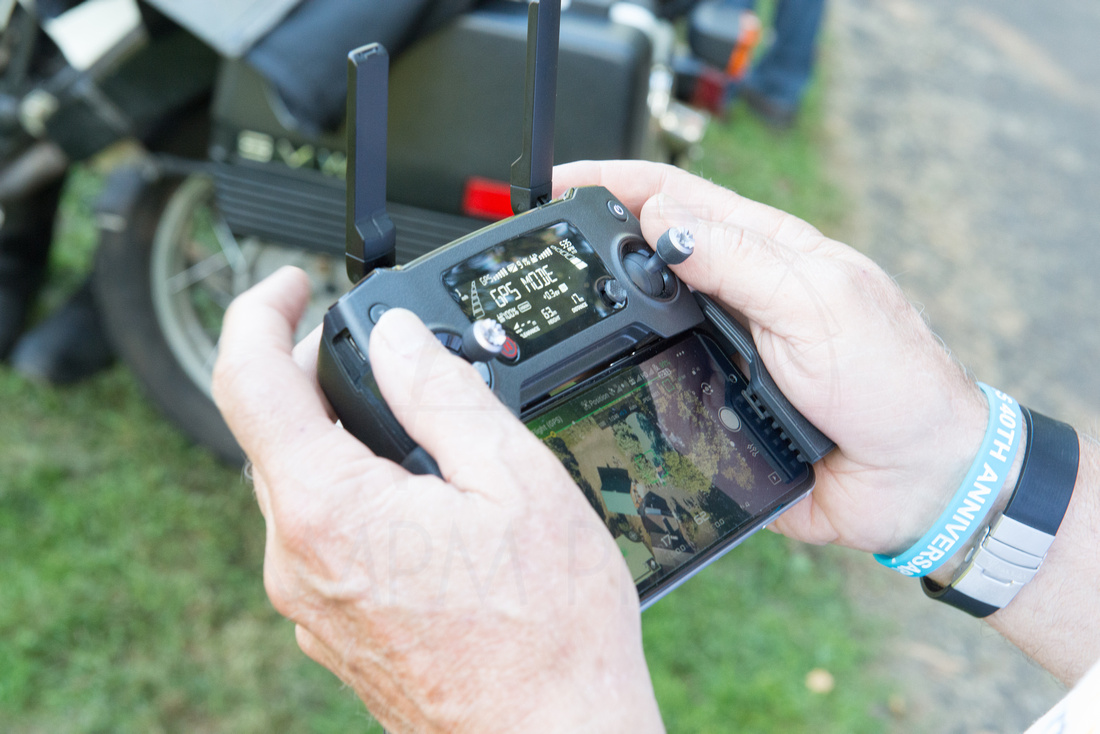 Just a wonderful event.  In the evening we were treated to some great Accordion music, which Hans and Schorsch enjoyed as well. 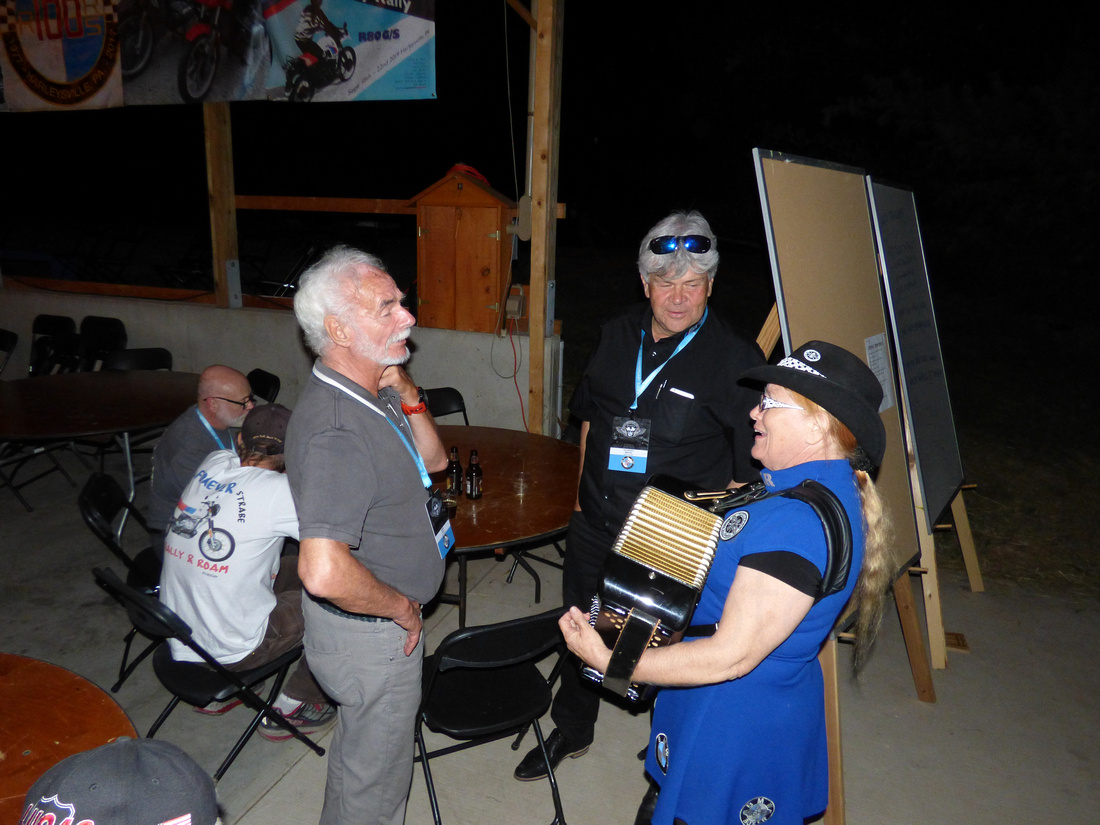 Sunday morning was special, in that Todd was leading a ride as part of the Motorrad Vintage Fescht, AND Hans and Schorsch would come along for the ride.  RJ and I stuck around to see off this Motely Crew, then headed home ourselves. 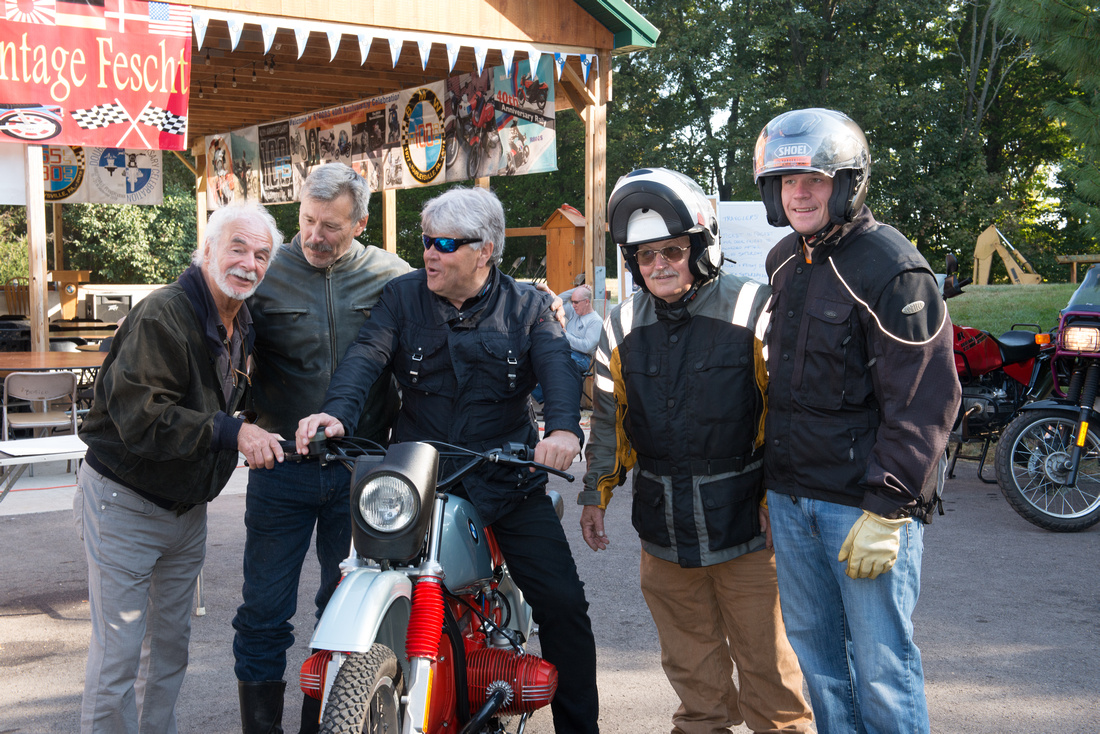 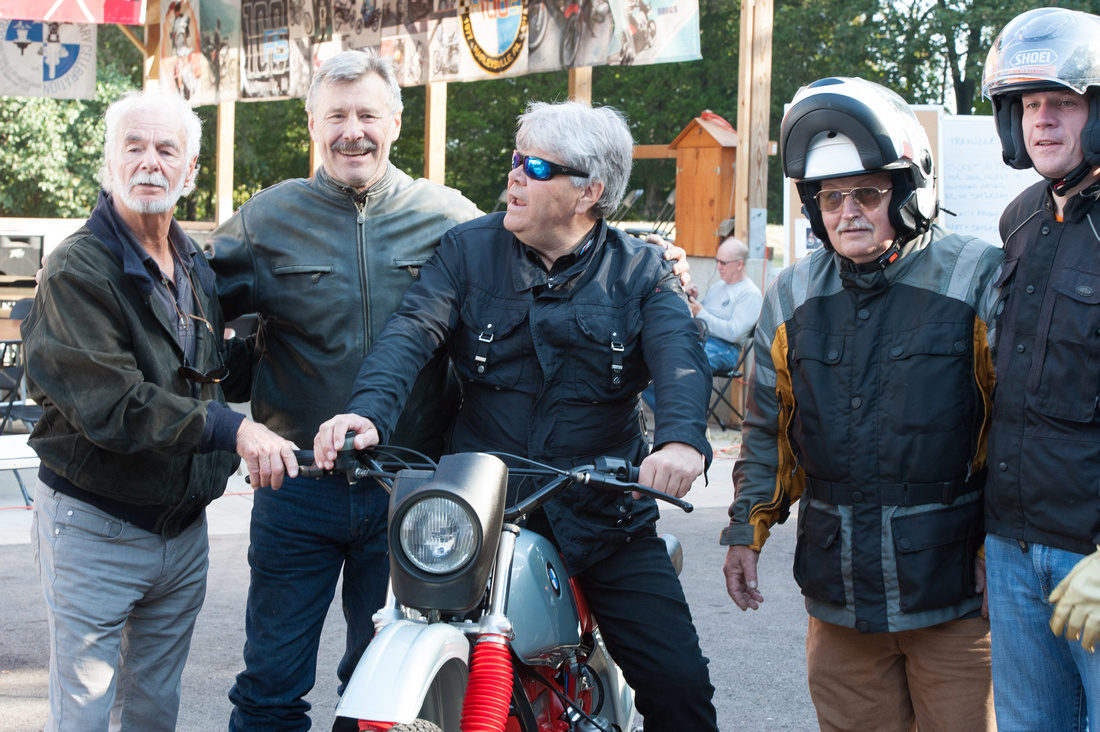 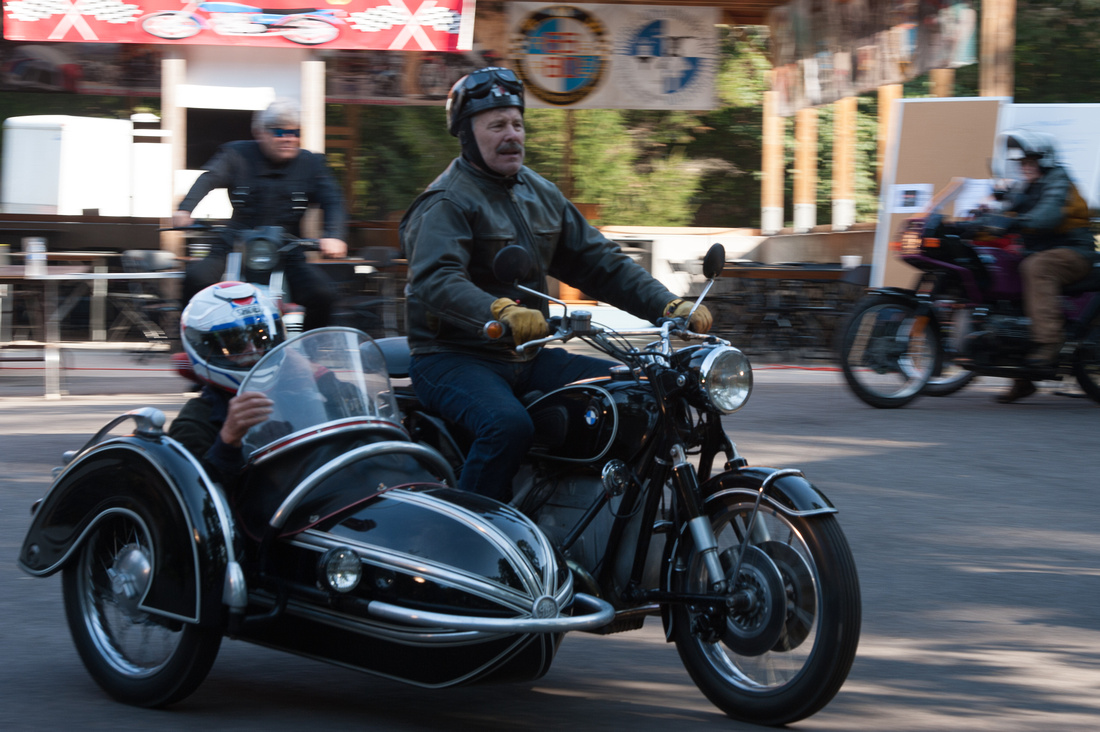 While the boys were out playing around, Laura and i had some phone photographing her beautiful Aussie's.  Yes Ken that is your tent and chair!  LOL 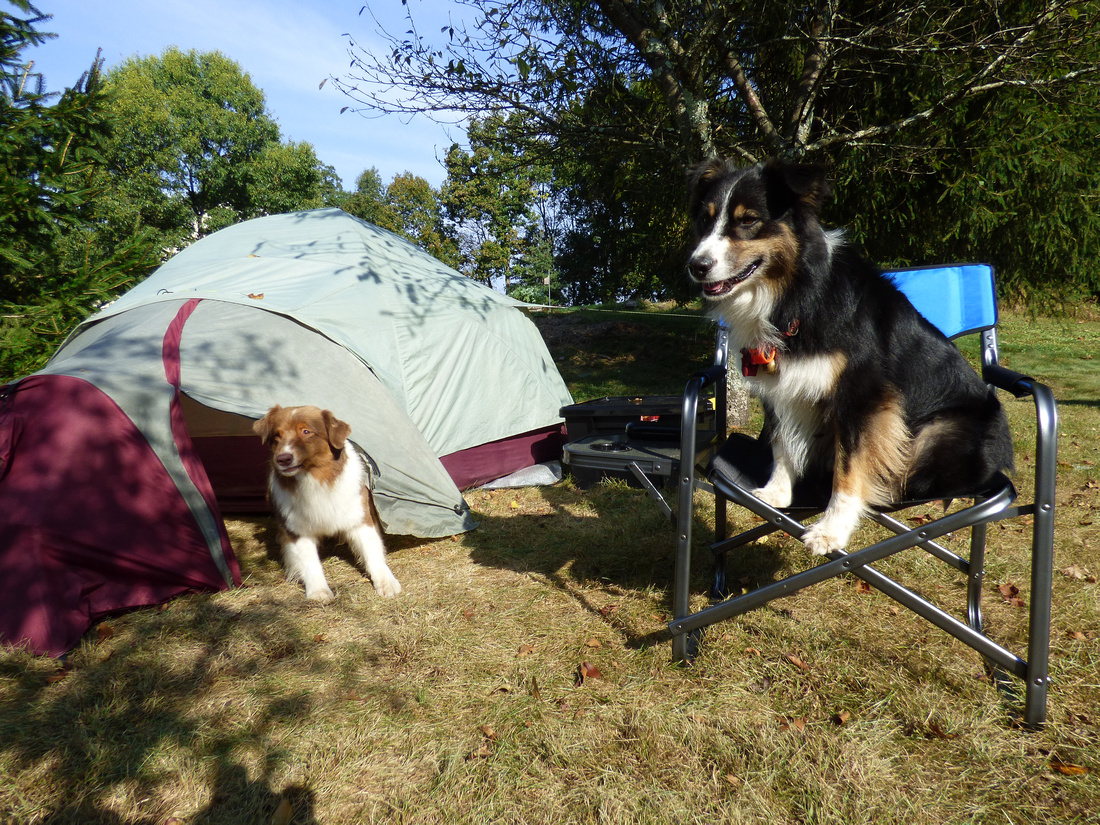 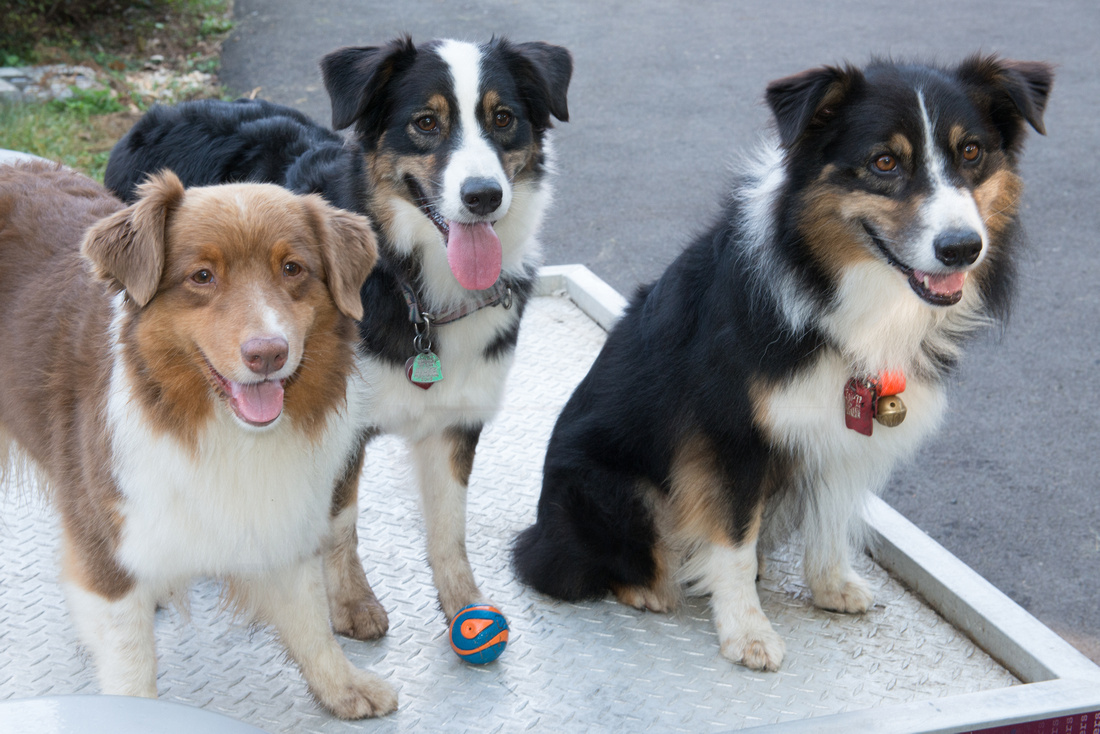 RJ had a nice ride home, split up after lunch and each mushed on to our respective homesteads.  parking the bike, I reflected on another great motorcycle related event, possibly the best one yet.  Seeing Hans again, expanding on our friendship, and having a second bike in my collection with the iconic "Hans A Muth" signature is pretty cool! 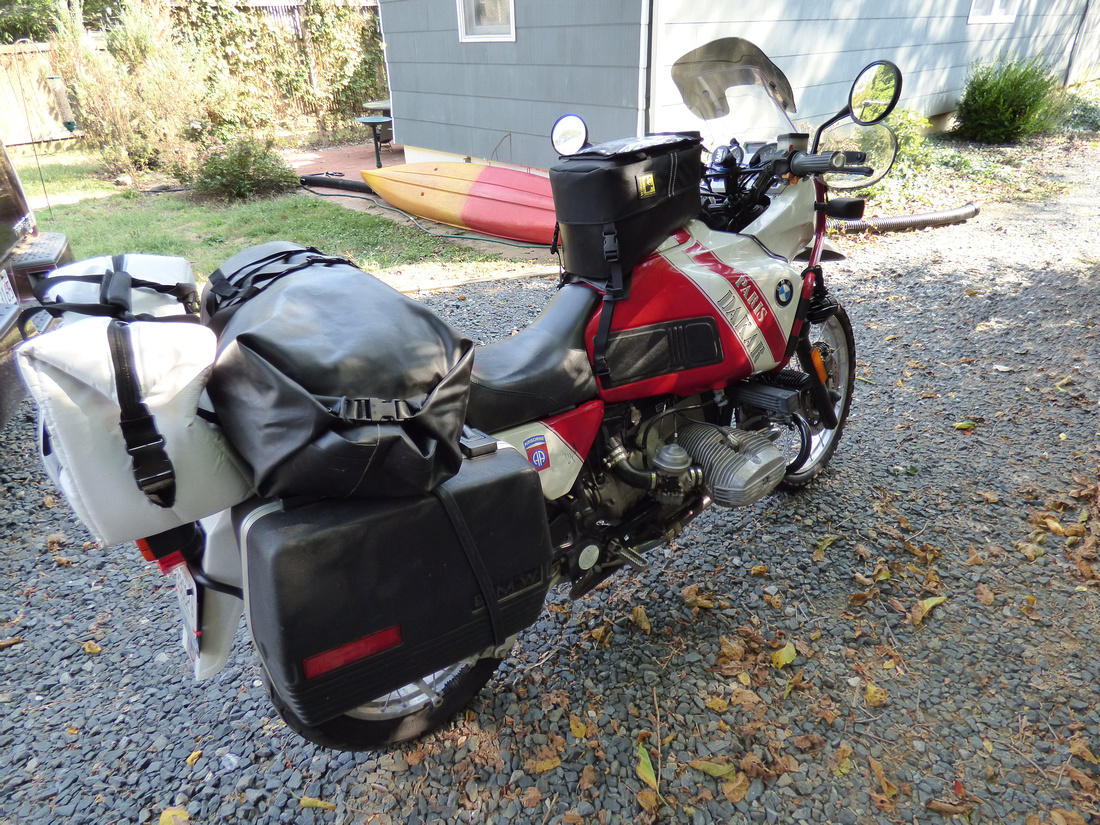 In 2017, Todd and Laura hosted a similar event, dedicating the 40th Anniversary of the R100RS.  I rode Serial Number 40 to this event, and finally got to meet Hans.  Photographs of this rally can be found by clicking here

Thank you Todd & Laura.  Thanks to all that helped make this event one that will not be forgotten.  Top Notch!