The incompetent elitist a-holes at Annapolis Rommel Hardly-Ableson (sorry fvcking auto-correct, I meant Harley-Davidson) sent me to Chesapeake Cycles when their Service Tech informed me that they could not change an innertube in my BMW wheel - Say WHAT? So I went to Chesapeake Cycles, talked to their Service Manager Vernon and he got my wheel taken care of, while I waited ... looking around the showroom, I saw Triumph's, Norton's, Victory's and Indian's. Nice selection for sure. I did however come back to the bike below multiple times (was already thinking about adding a newer BMW GS). 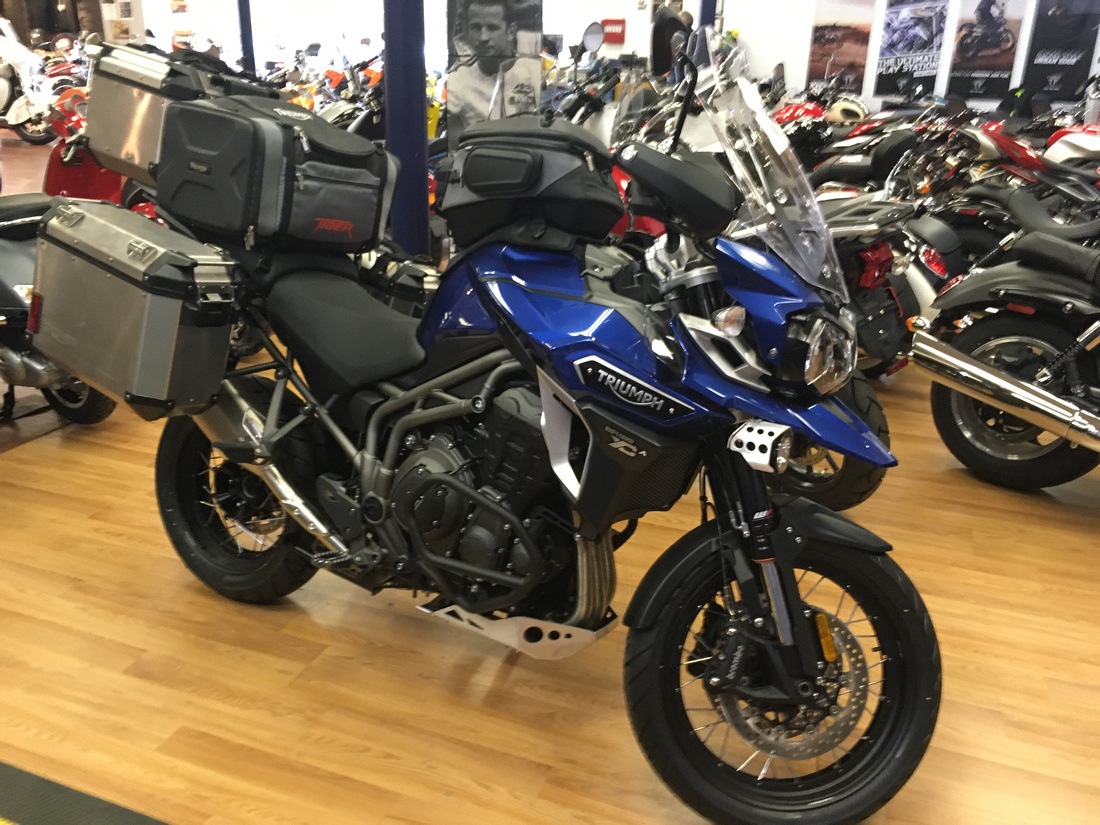 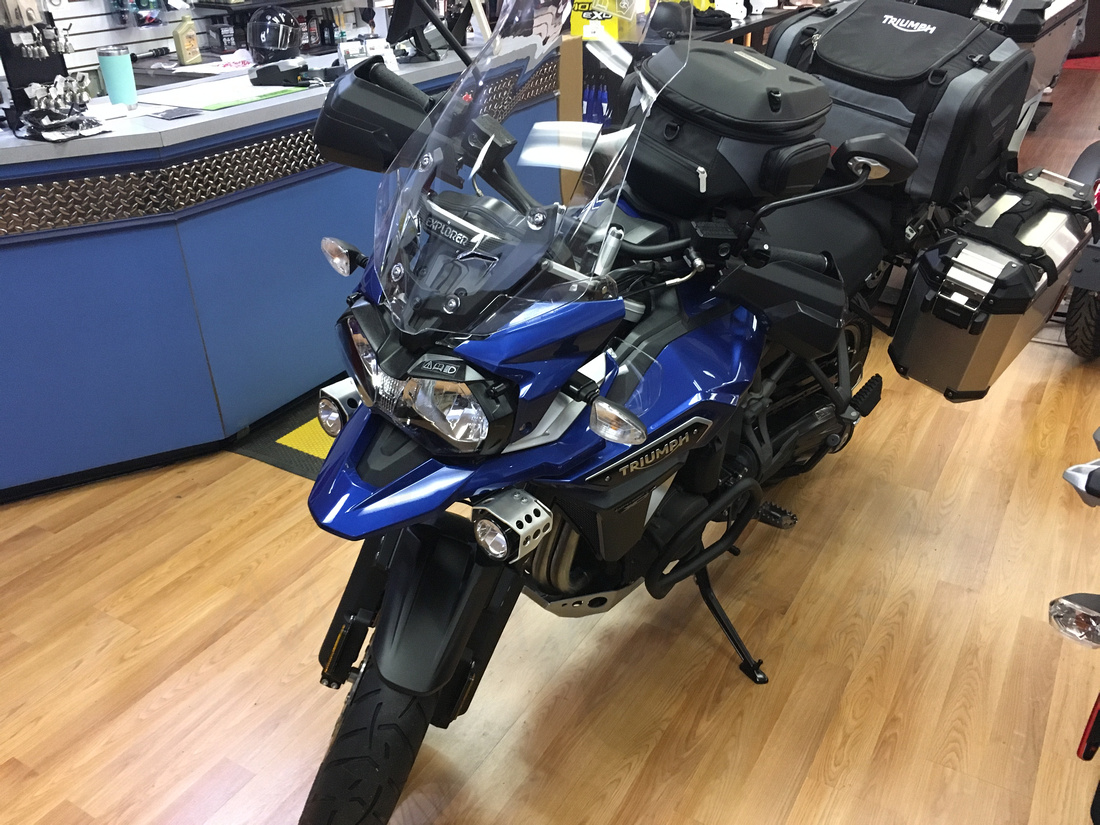 Vernon came over and we talked about the bike (a 2017 model), he answered some questions, explained all the items the bike came with. Before I knew it, I put down a deposit on this bike!  Thank you Harley-Davidson!

Went to Chesapeake Cycles and took the bike for a short 18 mile test ride. In all my years riding I have never owned a bike where I actually got to put all miles onto the odometer.  The '97 BMW K1100LT I purchased years ago had 80 miles on the clock when I purchased it.  This bike had 0 (OK, maybe 1 mile) on the clock. 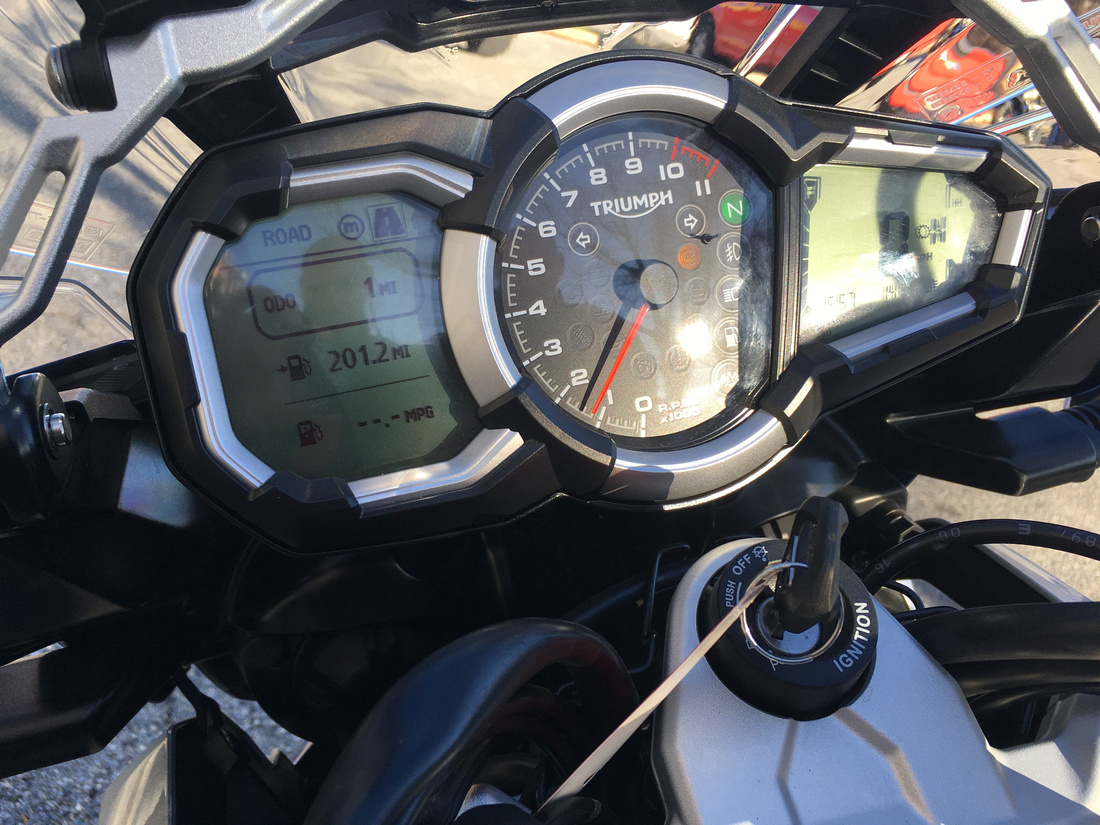 I returned the bike with 18 miles, albeit such a short ride, i was thoroughly impressed, instant throttle response, great brakes, decent wind protection.  Very happy. 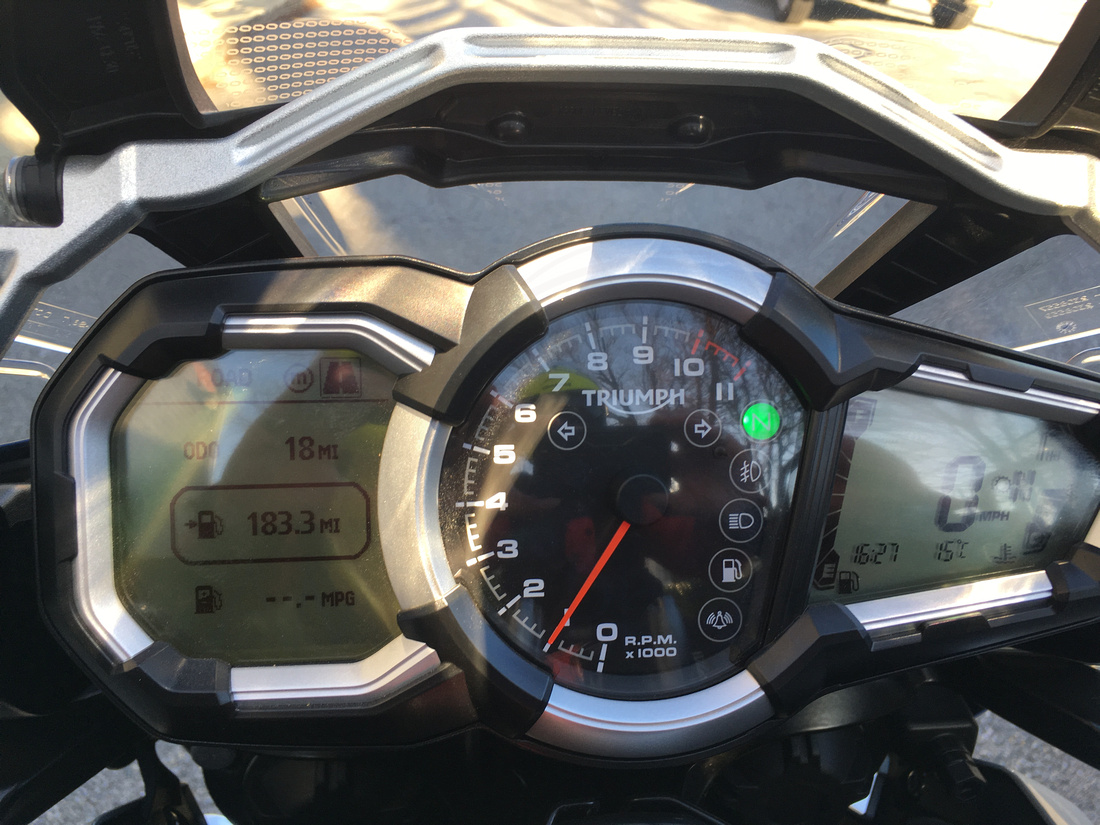 I went back inside and finalized the required paperwork to complete the purchase.  While sitting down with Mike and Brad, i asked if one day i could have this banner that was hanging in their showroom.  They said "Sure, we switch these out with next years' models soon, we'll save it for you ...". Of course I was thinking: "Sure you will ...". 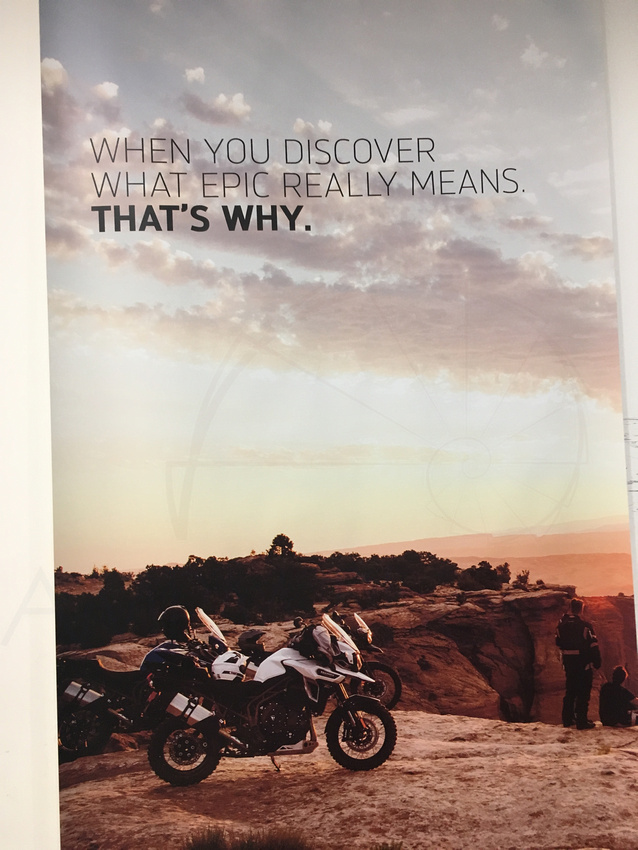 I want this bannerI work with Epic everyday ...

I went home happy and started to prep my garage for the arrival of the new addition. I have made the decision to sell the big '05 BMW K1200LT.  In a weird twist of Fate in all of this, my co-worker Bill is interested in the K1200LT!  This could not work out any better.  And Blue Angel gets to sort of stay in the family, since Bill and I are VERY good friends.

Bill helped me take the Triumph home, and he got a chance to see the K1200LT, I think he liked it right away ... 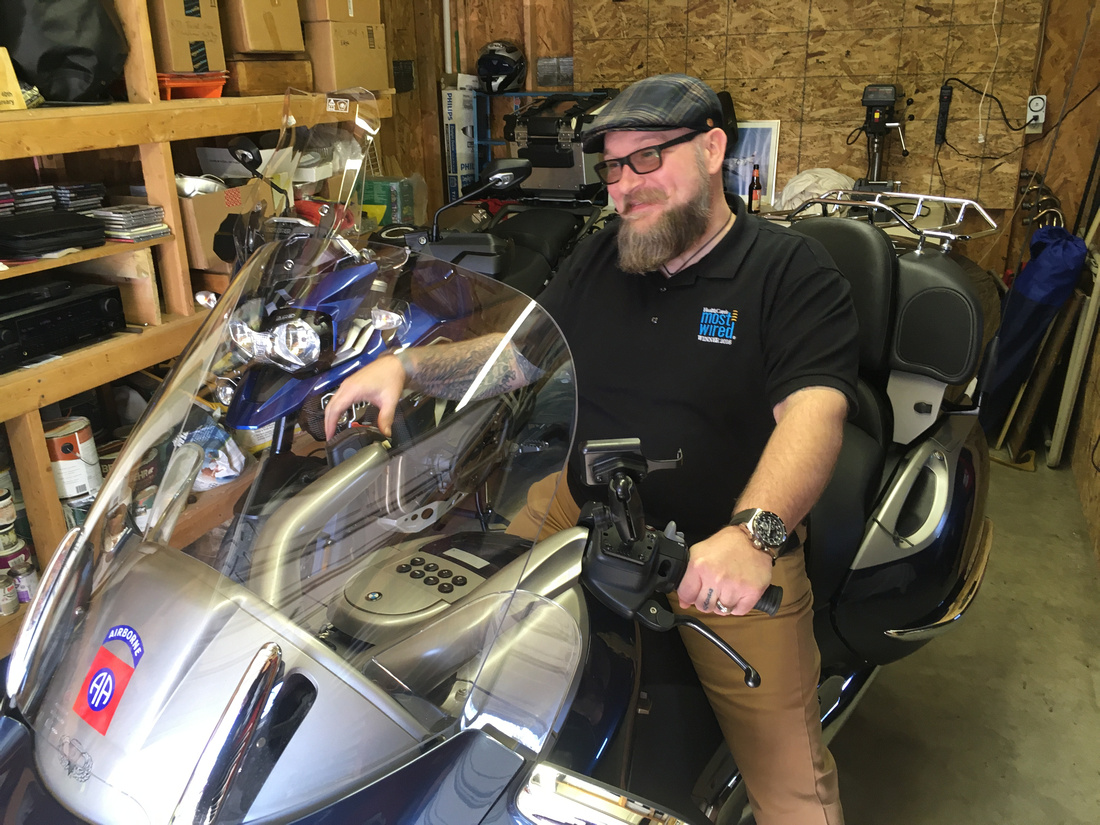 Bill and I agreed on a fair price and i began prepping the bike for him.  It needed a front tire, so I skipped Rommel Harley Davidson of Annapolis, and took a new tire and the wheel to Chesapeake Cycles once again. Vernon once again did not charge me for the tire replacement.  Brad also hands me the Triumph Banner I had asked about!  -WOW-  What a great place.

Over the next weeks and months I prepped Bill's bike for him.  Removed the 82nd Airborne Decal and Jump wings, installed a USB charger for him, installed the stock seat so that he could sell the Russell Day Long saddle. 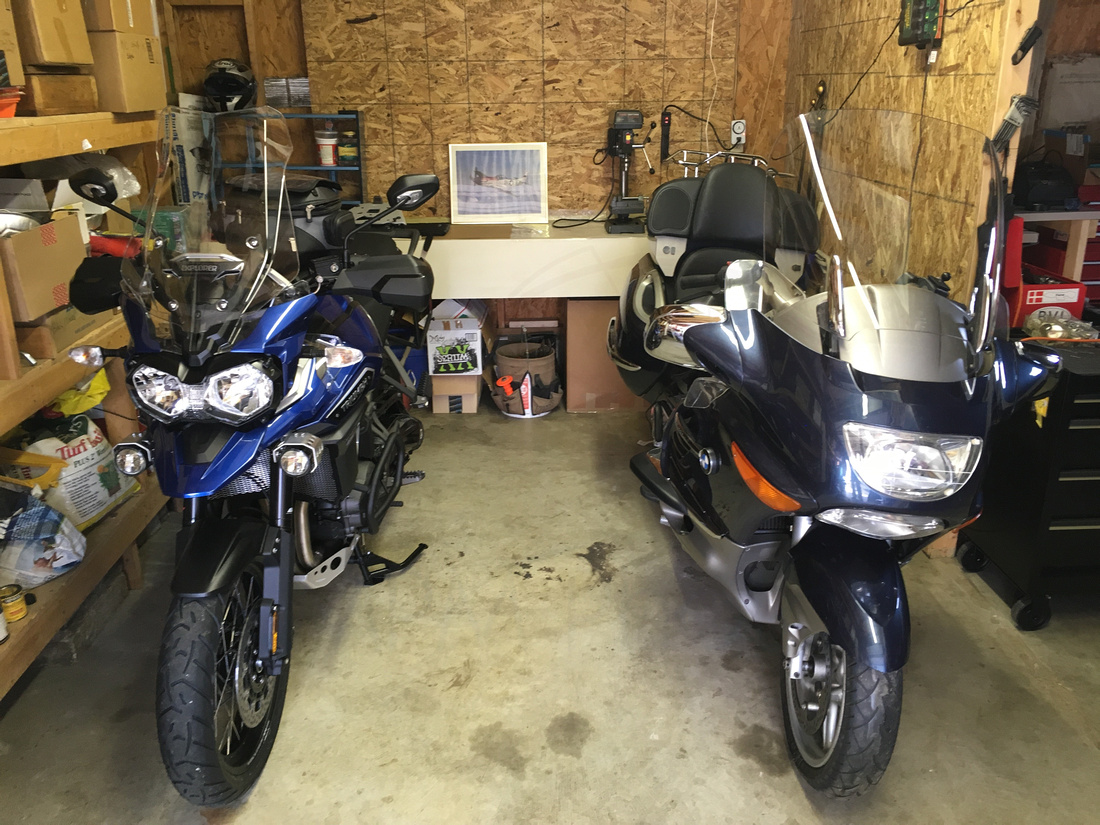 Bill and I went for a test ride and I noticed some odd electrical behavior (brake light not working, horn not working).  Wow, this is huge, need all these to be working for the Inspection.  Also noticed that the central key bag lock is not working. Noticed that the horn fuse was blown.  Ordered some fuses, when the came in, the new fuse blew right away again.  Well crap ...  did some more research, this all appears to be a common problem when the K1200LT main battery fails, it will drain another battery within the alarm unit.  Of course that battery is not replaceable.  One has to order a new alarm unit - none of this is in the budget.  Bill and I agreed that he would buy the unit, while i would give him my Multivario Tankbag (I kept it since I use it on my '77 BMW R100RS). 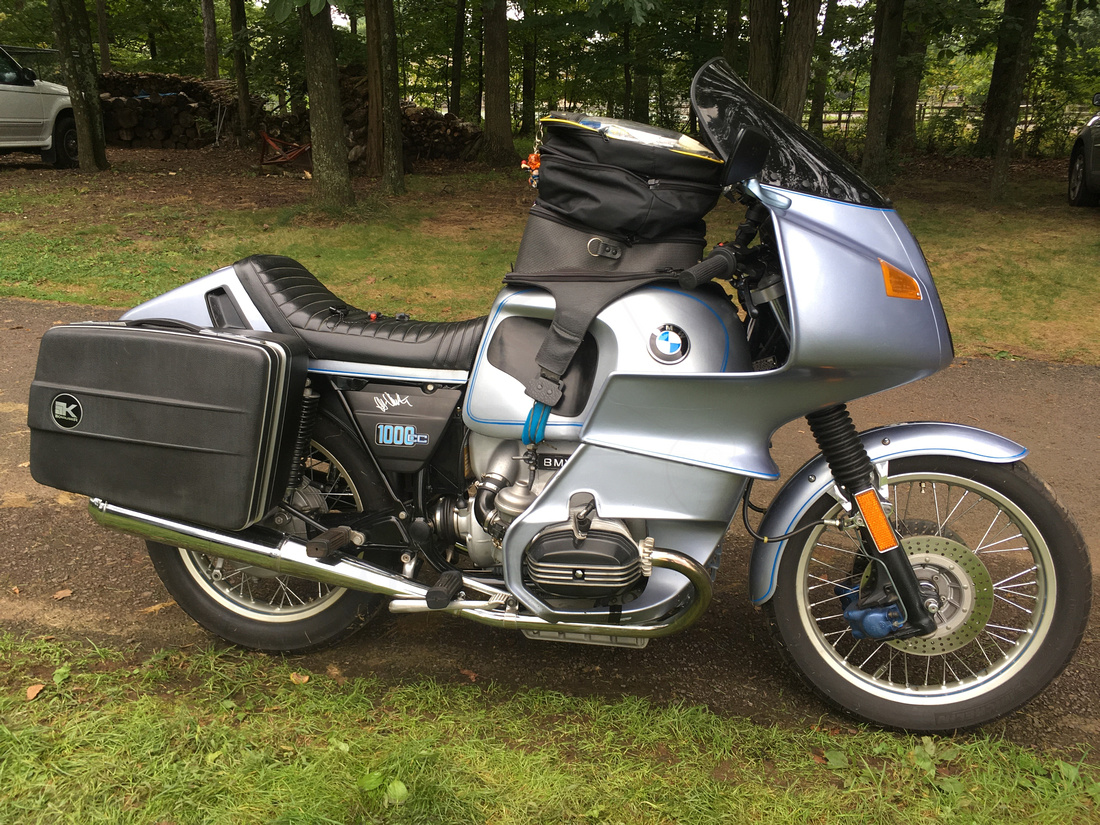 The alarm unit came, I removed the old and installed the new one, and then had all sorts of issues getting the new unit programmed with using the ignition and key fob, and the many iterations of pressing certain buttons in certain orders - while reading the instructions.  Finally Bill came over and with us working together over a few beers we finally got it (turns out our directions were slightly incorrect).  After a brief happy dance i could finally proceed and get the bike inspected. Bill needed some time to clear out space in his shed to park the bike, so neither of us were in a particular hurry to complete the transfer of ownership.

Sometime early in March i installed a USB Charger so that my phone can charge while riding the bike.  Also got the standard RAM mount and craddle to hold my phone.

Finally had a bit of time to take the Triumph for a little ride, this bike continues to impress on all levels. My only "gripe" so far is that the clutch engages a bit late, i tend to over throttle just a tiny bit, which I need to make an adjustment for (might be a setting I can change on the clutch lever).  The bike is just FUN to ride.  The brakes are incredible.  The "immediate" power on throttle input is remarkable. Cant wait to take her on the first long ride. Officially naming her Blue Angel 2. 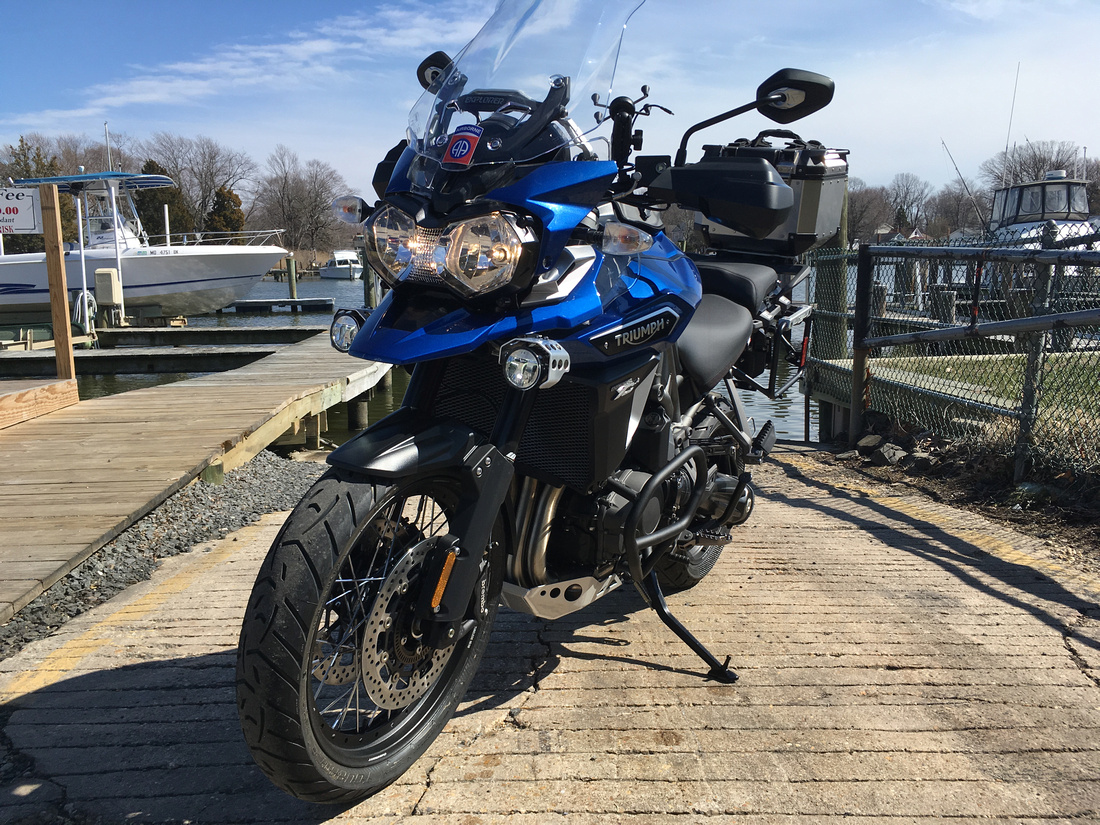 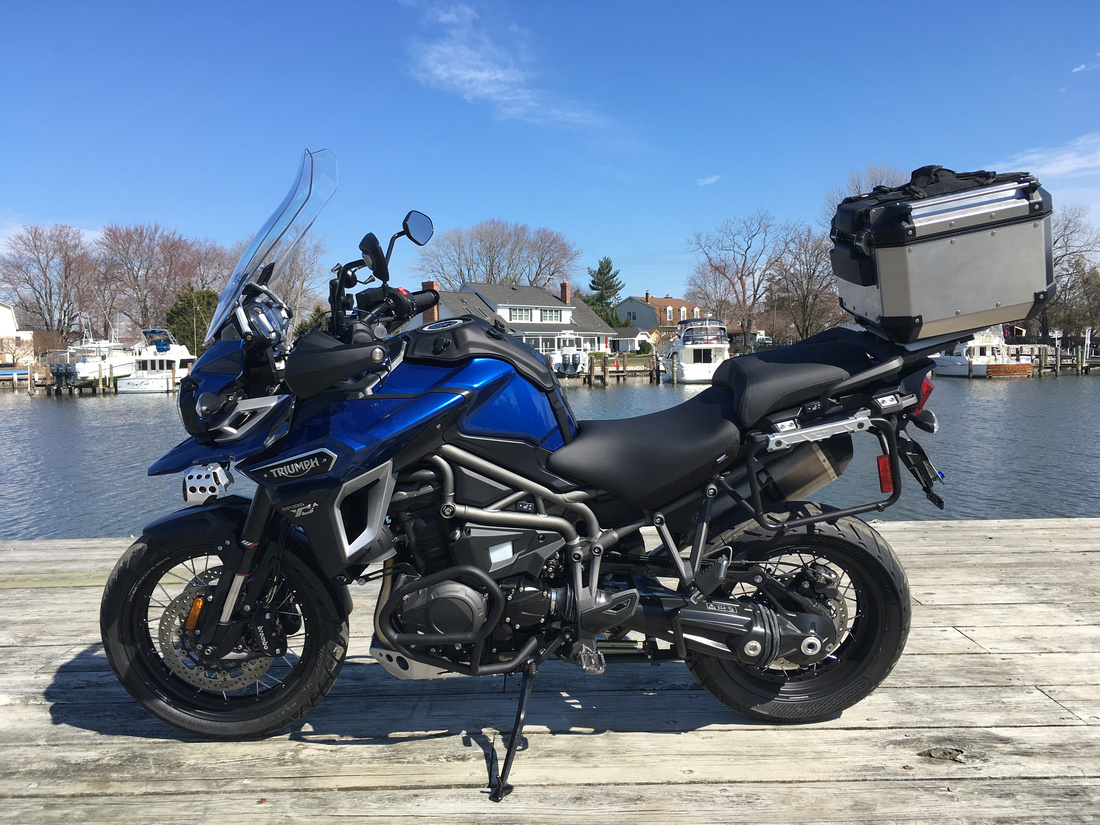 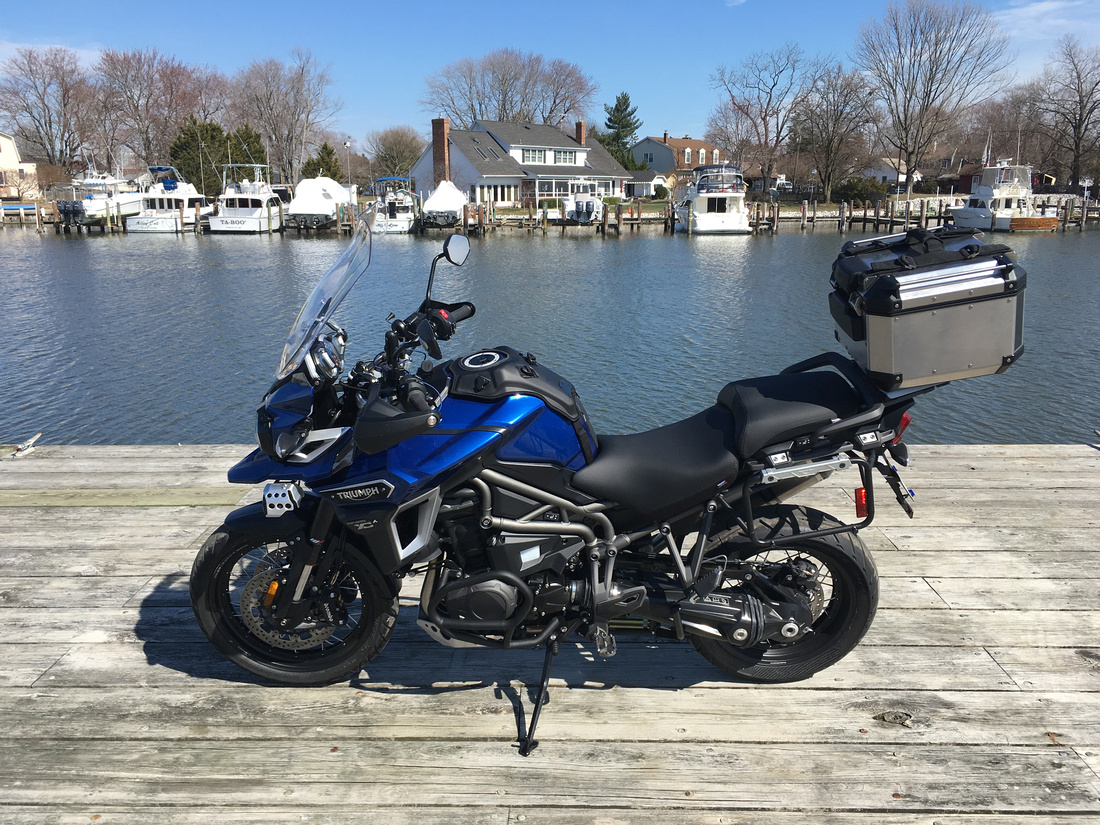 Headed to the Airhead PA SpecTech day held at my friend's Rob's house near Philadelphia.  Event photos here  I left at 6am and noted the lowest temperature to hit 36 degrees.  Chose the more relaxing Eastern Shore route to get to Rob's. I'm still in the break-in period, so not testing performance that much. I was very disappointed to see the low fuel light illuminate with only about 150 miles on the odometer.  I also noticed the stock seat to be fairly uncomfortable.  Other then that I'm very pleased with the bike. My good friend RJ also checked out my new ride. 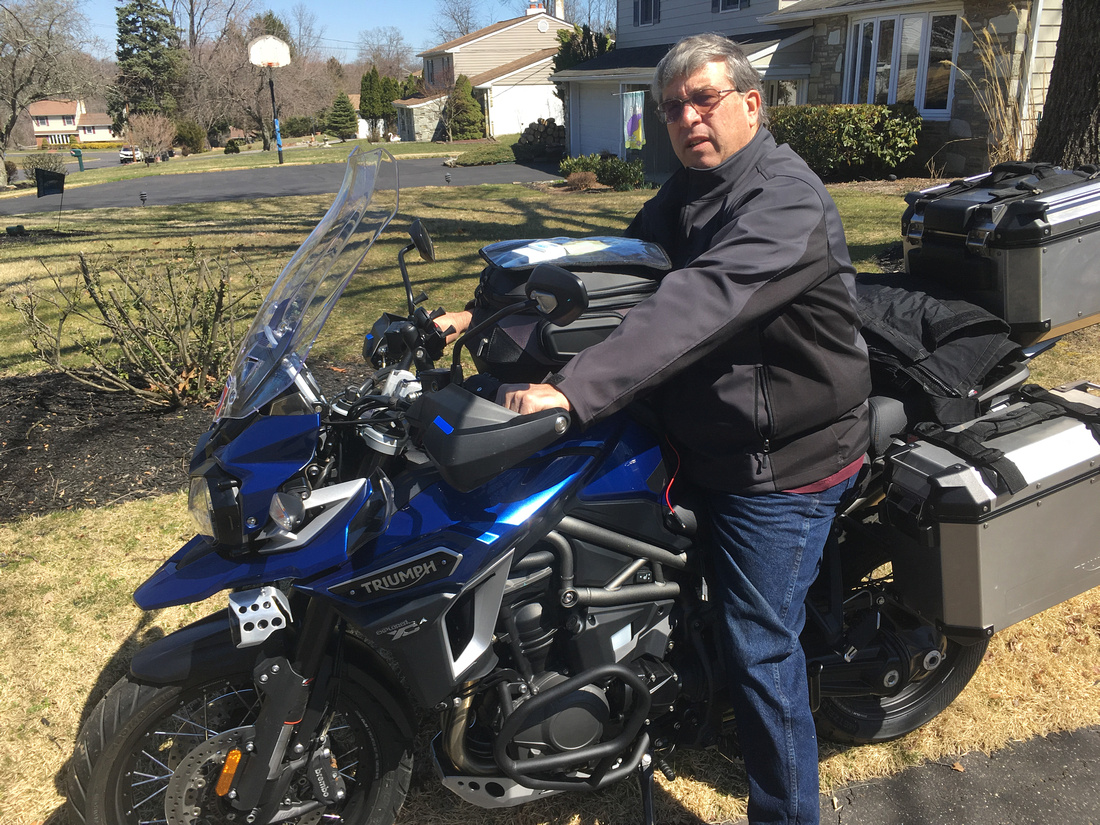 My last ride on the K1200LT when I took it to have it inspected.  One item of note is that the inspector remarked how clean and well kept this bike is considering its age. 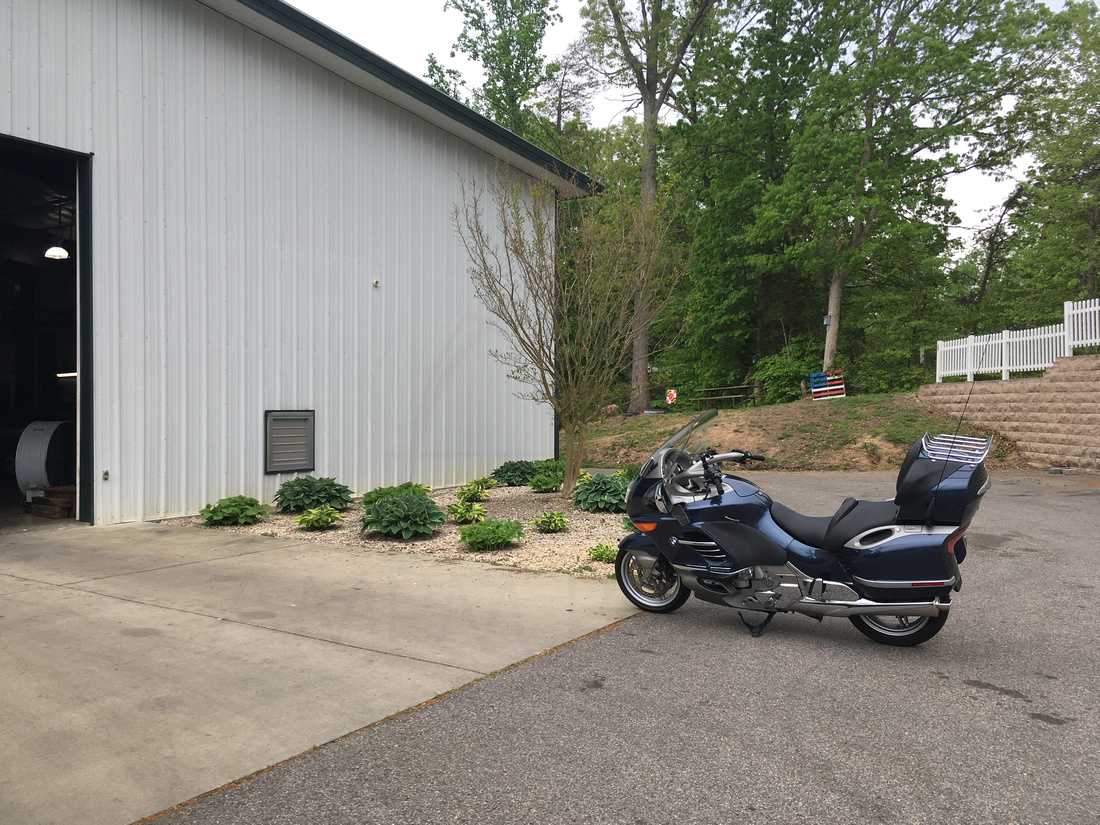 The same day i headed towards Auburn,  IN to attend a Tech Day on Blue Angel 2. The first day I only needed to get to PA to meet RJ and Lew, which is exactly what i did. As before, the bike is fun and a joy to ride.  The seat needs to be addressed, it is awful. The limited fuel range is actually a saving grace, can't comfortably sit in this seat for longer runs like i can on my other bikes with bigger tanks. 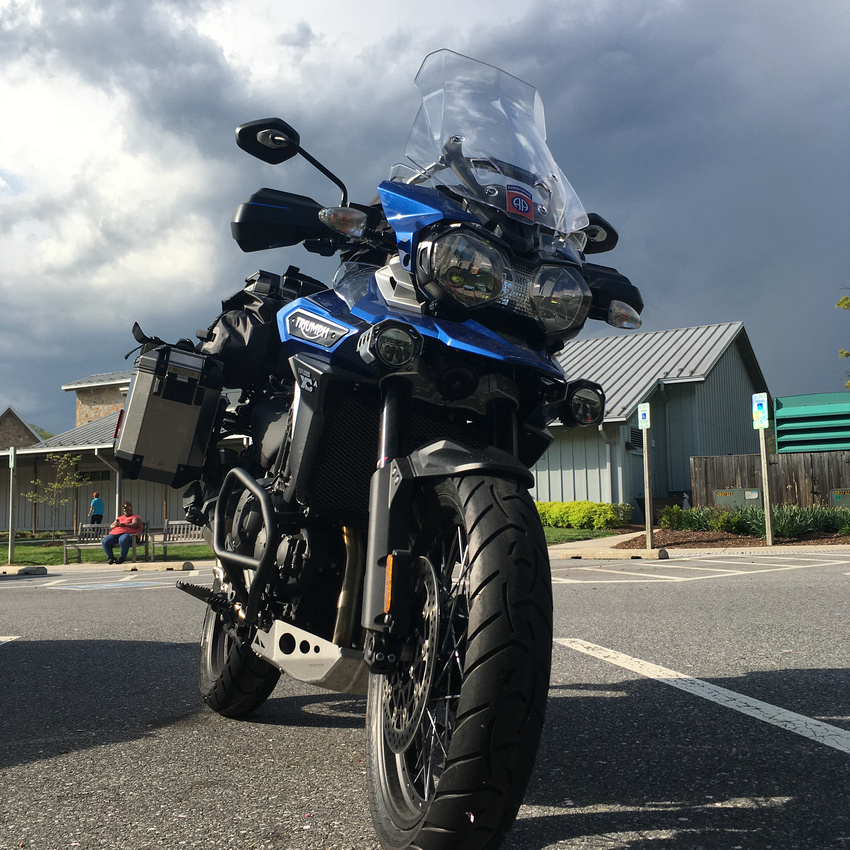 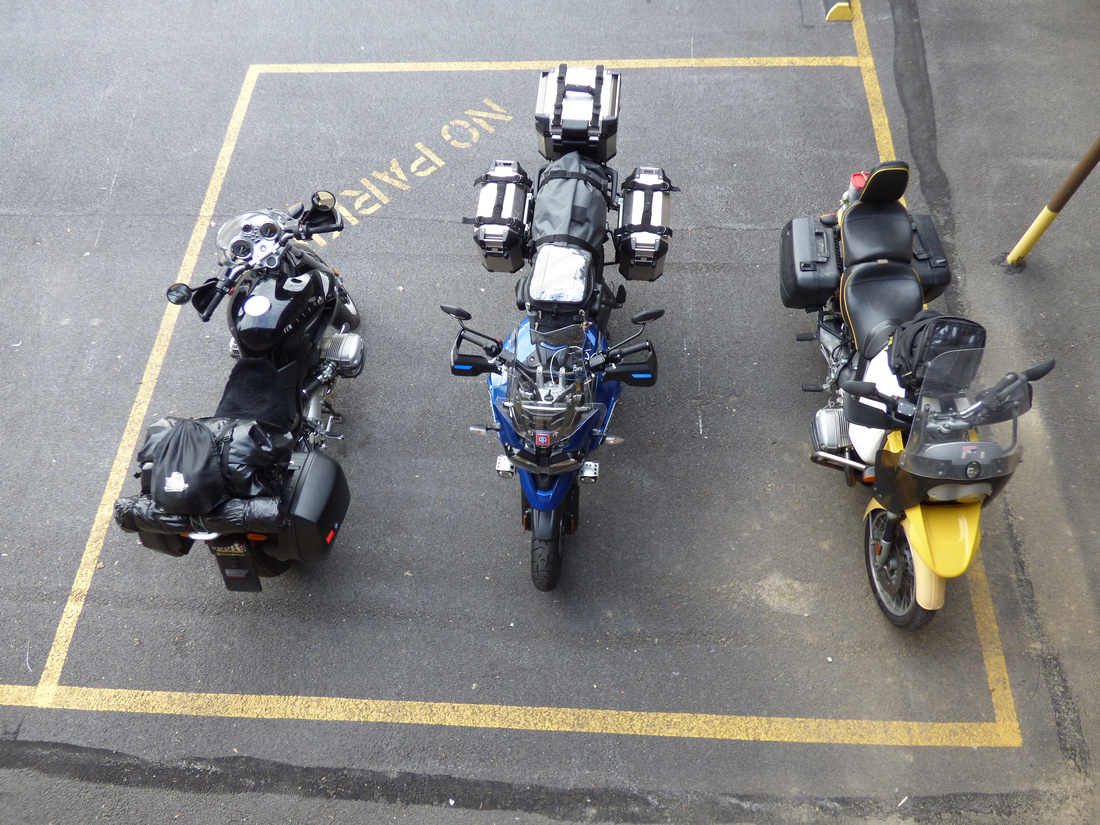 The following morning we mushed on, the only noteworthy event was RJ running out of fuel because he was stretching his mileage to get to a Ethanol Free gas station ....  We attempted to siphon some fuel from the Tiger, didn't really work.  Lew ended up buying a $9 48oz 180 octane (I'm kidding) fuel bottle, that got us to the Ethanol free gas station. 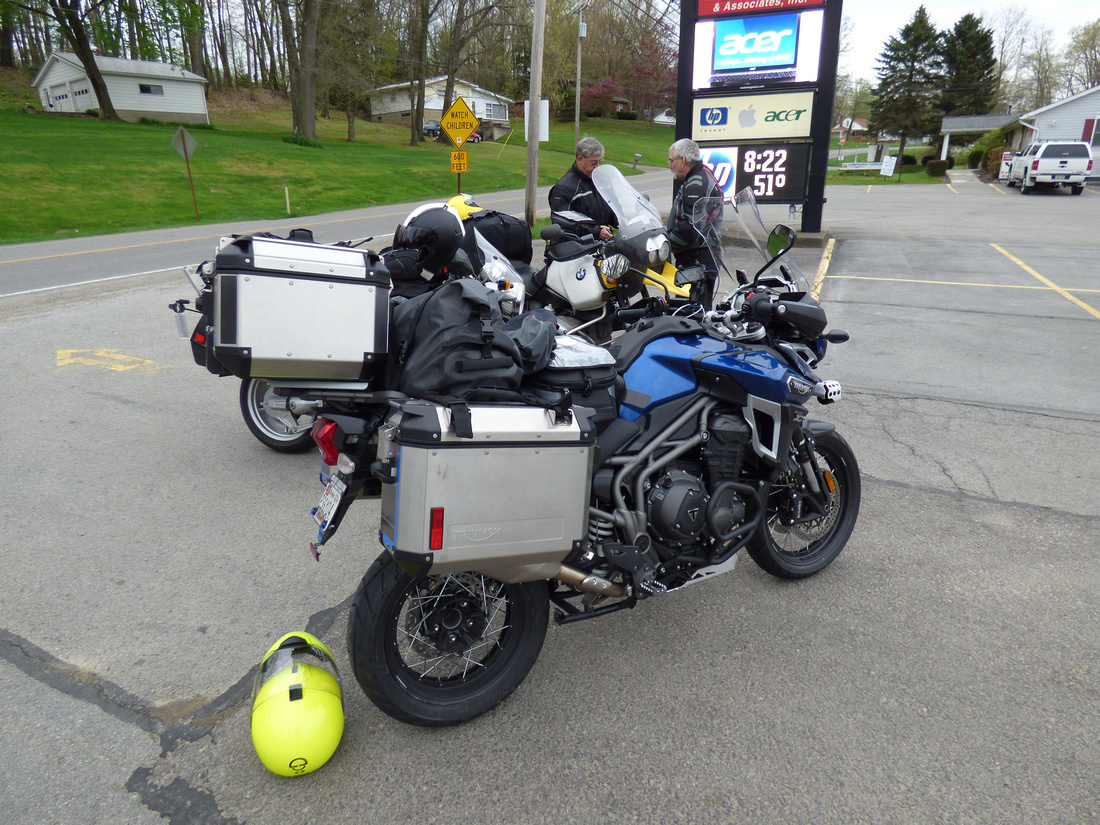 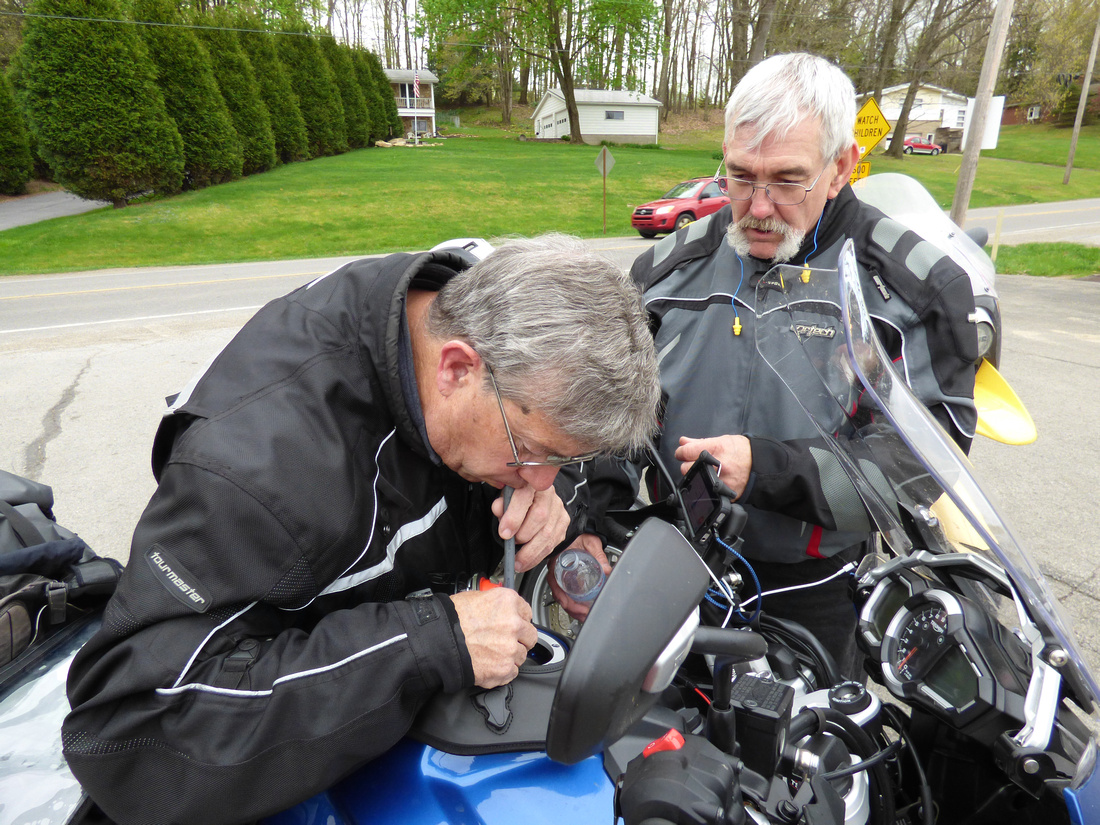 The other noteworthy mention is that i got to do a little off-roading when Don Beverage and I played around in a cornfield. 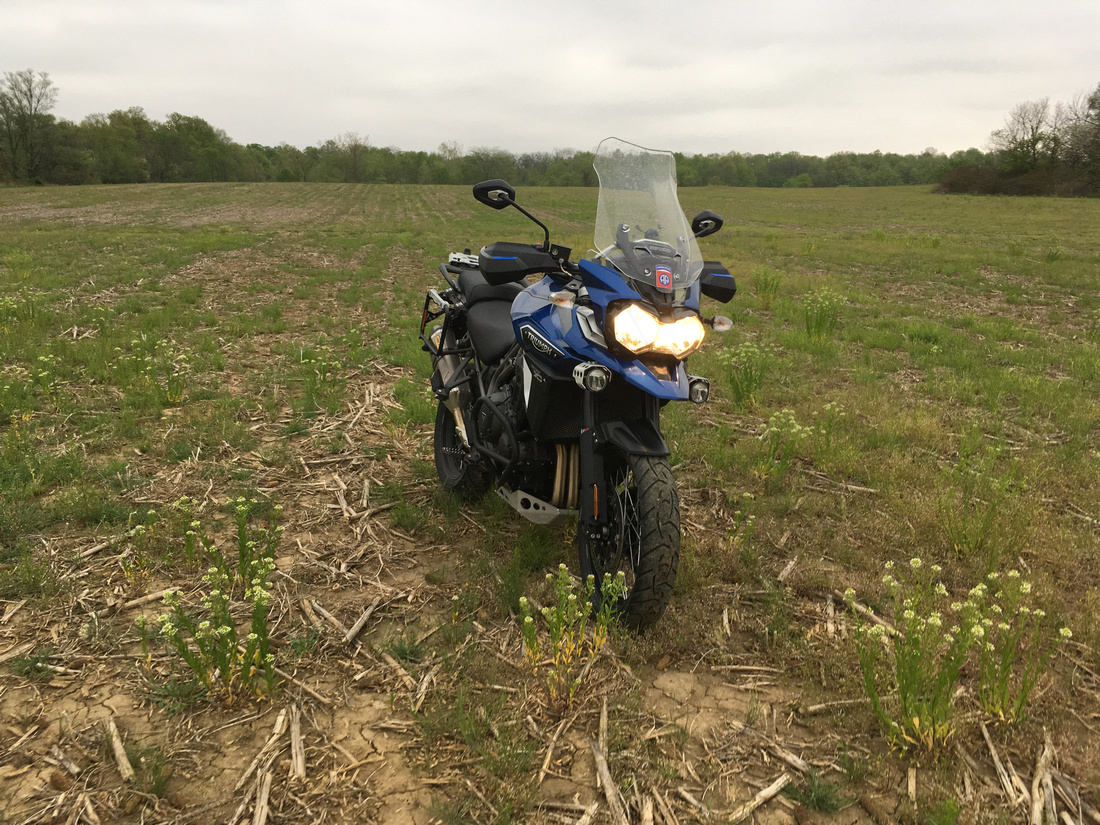 The Tech Day itself was a blast, partied quite hard, left Auburn with a huge hangover at 8am, and was home in Annapolis by 7pm.  Literally just rode tank to tank to tank.  I'm done with the seat. It's crap.  Will be looking into getting a Russell Day Long saddle (kind of standard practice for me).

The day finally came where Bill would take ownership of the '05 BMW K1200LT.  I decided to give him a little escort ride, just to make sure everything was good to go. By all accounts Bill & Izzy love this bike, which makes me so happy. 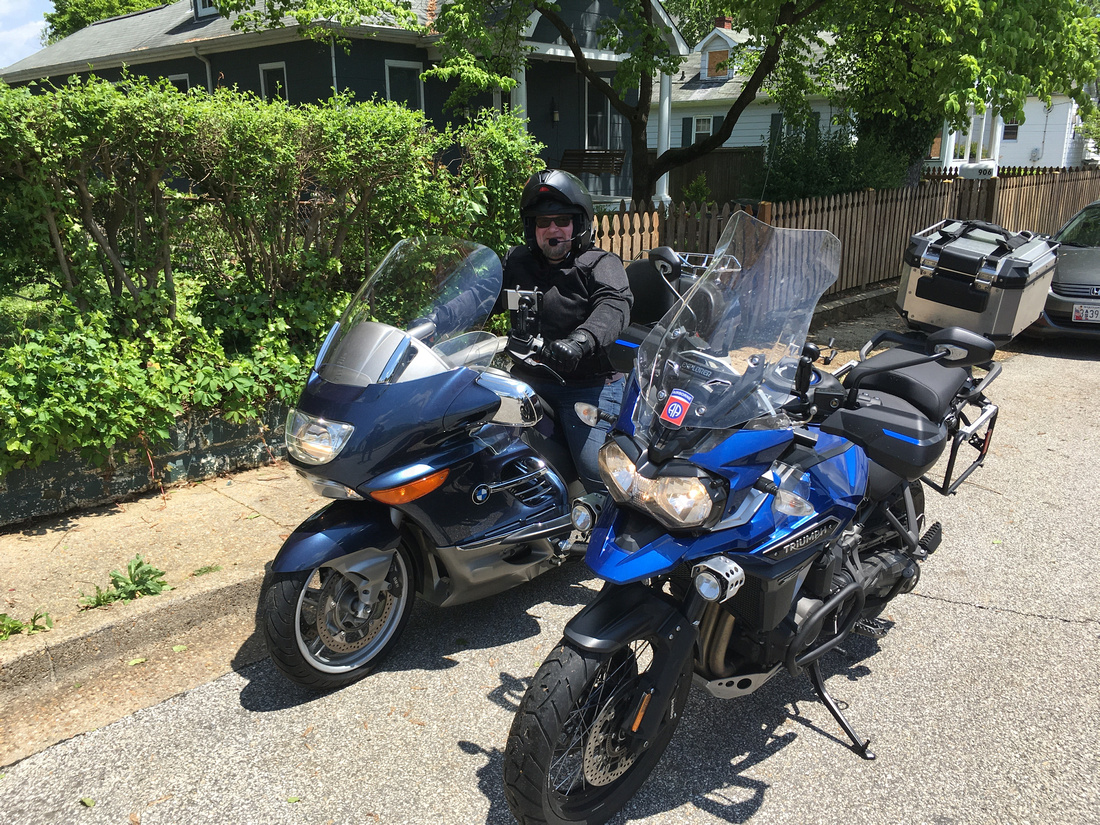 So this journal will now transition to exclusively cover the Triumph Tiger.

So far i learnt that the stock seat sucks. The gas mileage sucks. The fuel range sucks. When your bike sounds really throaty, ensure the exhaust is still in one piece.

The next ride was the first "longer" two-up ride to the Party Rider gathering in Bellefonte, PA. Steph also mentioned that the rear pillion is also not particularly comfortable. Yet another reason to begin talking to the Russell folks. 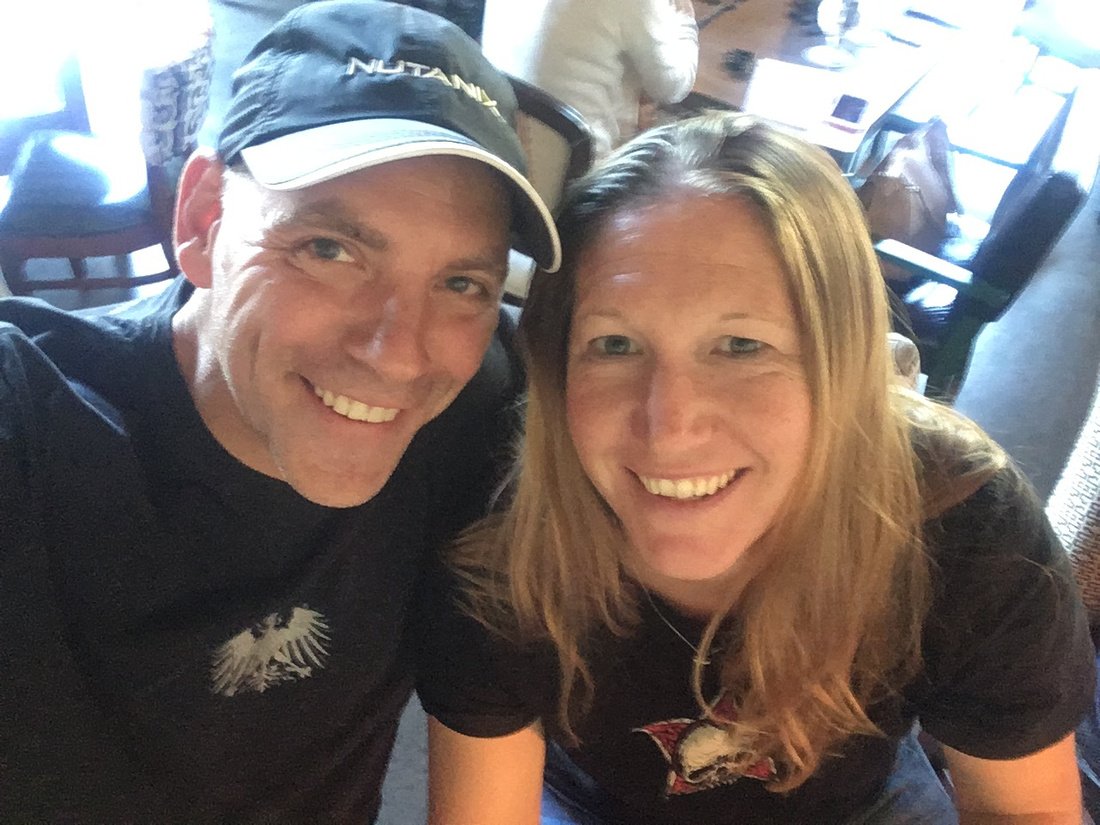 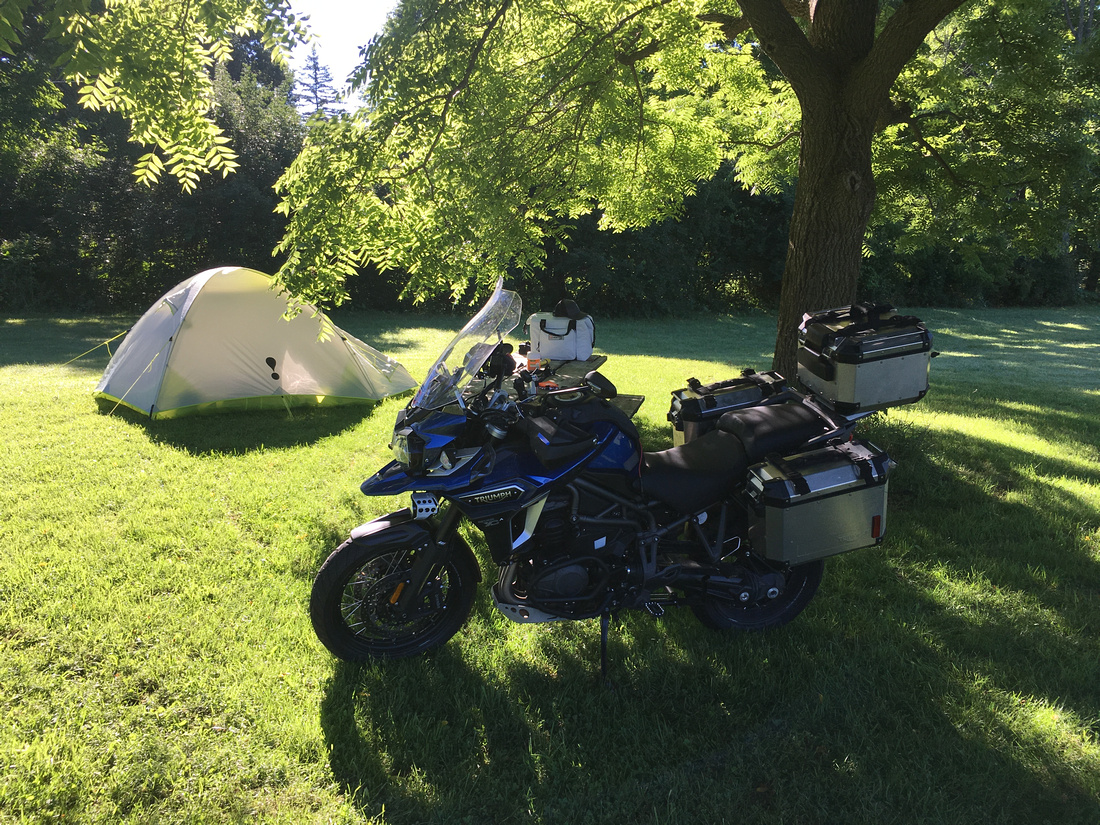 Two-up this bike performs about as flawlessly as when i ride by myself.  We were also camping, so carried a bit of weight in all of the panniers.  Still, no issues with handling, braking, rolling on power, etc.  This bike just runs well.  All around, possibly the best bike i have owned so far.  There may however be an issue with how much weight one can carry on this bike.  The allowable max load limit seems a bit low to me at 494 lbs.  We discovered this when my buddy bought the 2018 1200 Explorer.  He and his wife wanted to go on a trip and determined that after carrying the riders in full gear, they had 20 lbs  left before they would be over the legal recommended load weight.  Granted, he and his wife are a bit heavier then my g/f and I are, but this needs to be figured in, if you are looking to purchase one of these bikes.  My buddy and I looked for options to remedy this, I suppose pulling a trailer would make most sense, but is a PITA overall.  Curious how much weight the KTM Super Duke or the BMW GS can haul?

Bike is packed and I snapped this quick photo at 06:40am to head to Chris's house in Toledo, where a bunch of us met up to party into the night, and then rode to Beverage's the following day (in two separate groups). 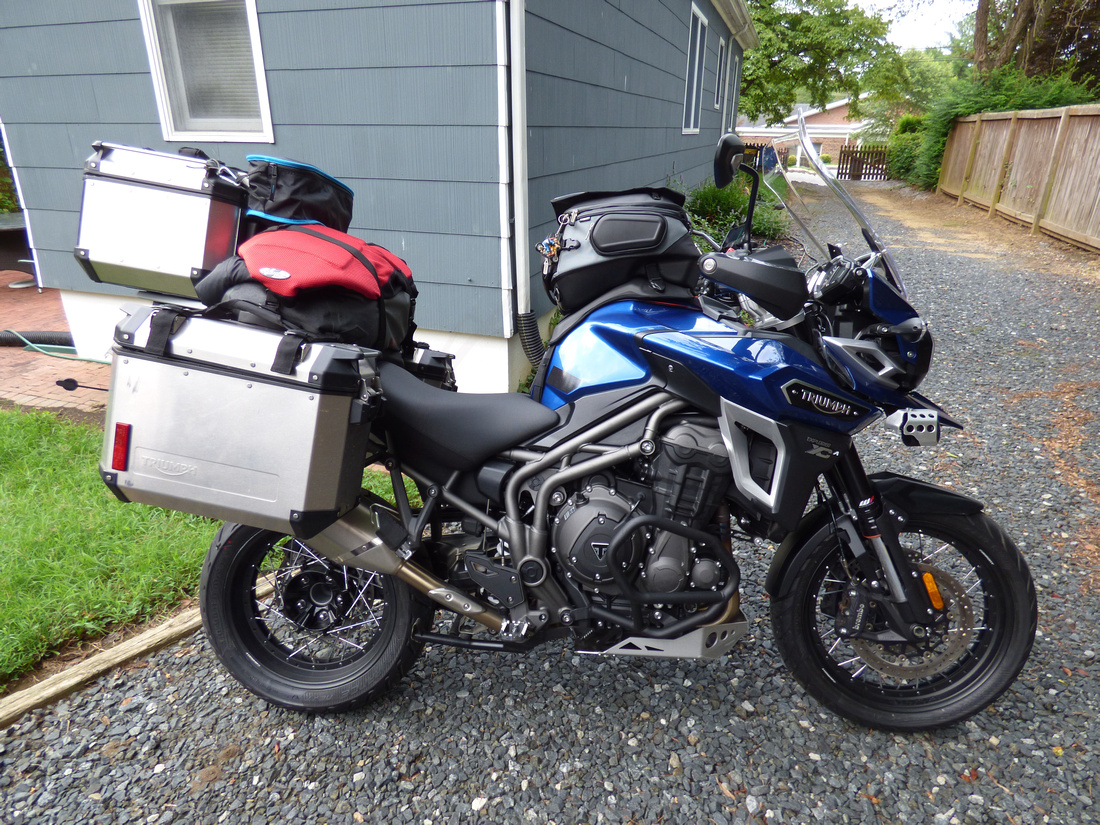 The ride to Toledo was largely uneventful, rode in rain for a while from Frederick, MD on.  Bike rides well in the rain.  I did switch the bike to the rain mode after having the rear tire step out on me when turning up onto a wet incline to turn into a gas station. The rain mode will reduce the power being able to be applied - it works well!. The rain setting also seems to lower the suspension a little (more on that later).