2014 -  UncaNorm gives Gretchen the R100RS.  Gretchen knows that I'm looking for an airhead and contacts me. An email exchange ensues, in which I seek information about this bike, which she answers including sending many pictures.

In October 2014 I make the decision to purchase Leiser Blitz from her (although technically the original owner as far as the title is concerned is UncaNorm).  So I am the second owner of this bike.

2014 - 2015 -  Leiser Blitz endures a major overhaul ....  performed by RJ, Lew and I with many others being involved in the process somehow or another (all of whom I am extremely thankful for).  Too cool, during the build of the bike, Gretchen scans in a few pictures of UncaNorm and Leiser Blitz and sends them to me.  Priceless artifacts!

Aug 2015: The resurrection of Leiser Blitz is largely completed, Gretchen meets RJ, Lew and I to look at the bike.  She surprises us all with these most exquisite handcrafted clay R77 mugs (yes - she made them for us (one for UncaNorm as well), each mug is custom made for each of us, with our names inscribed in them).  Too cool. 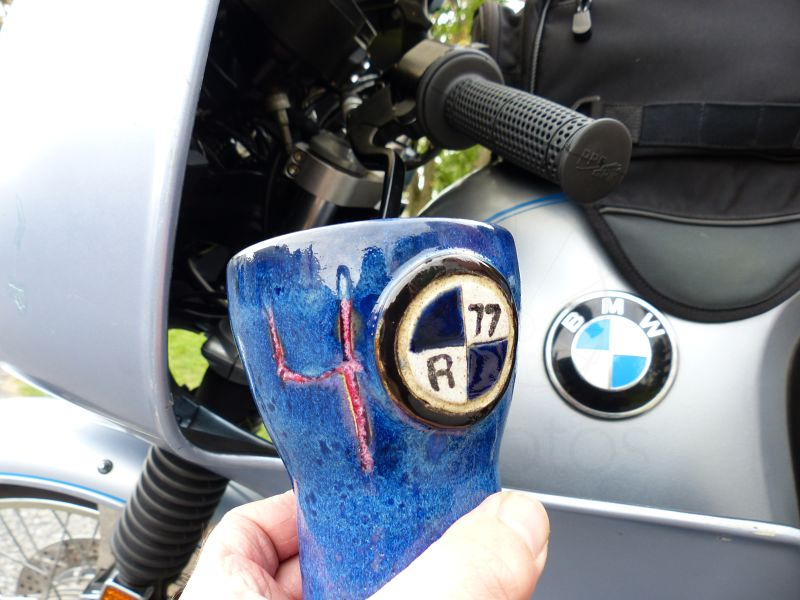 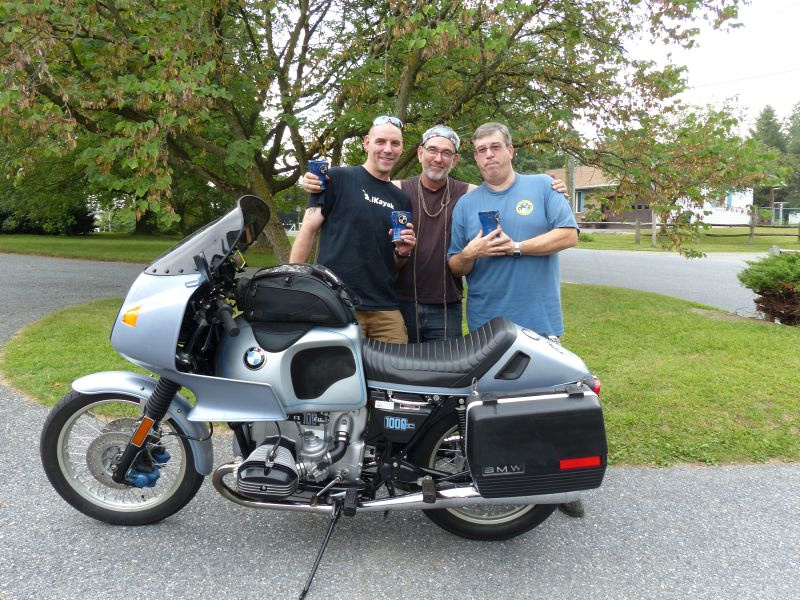 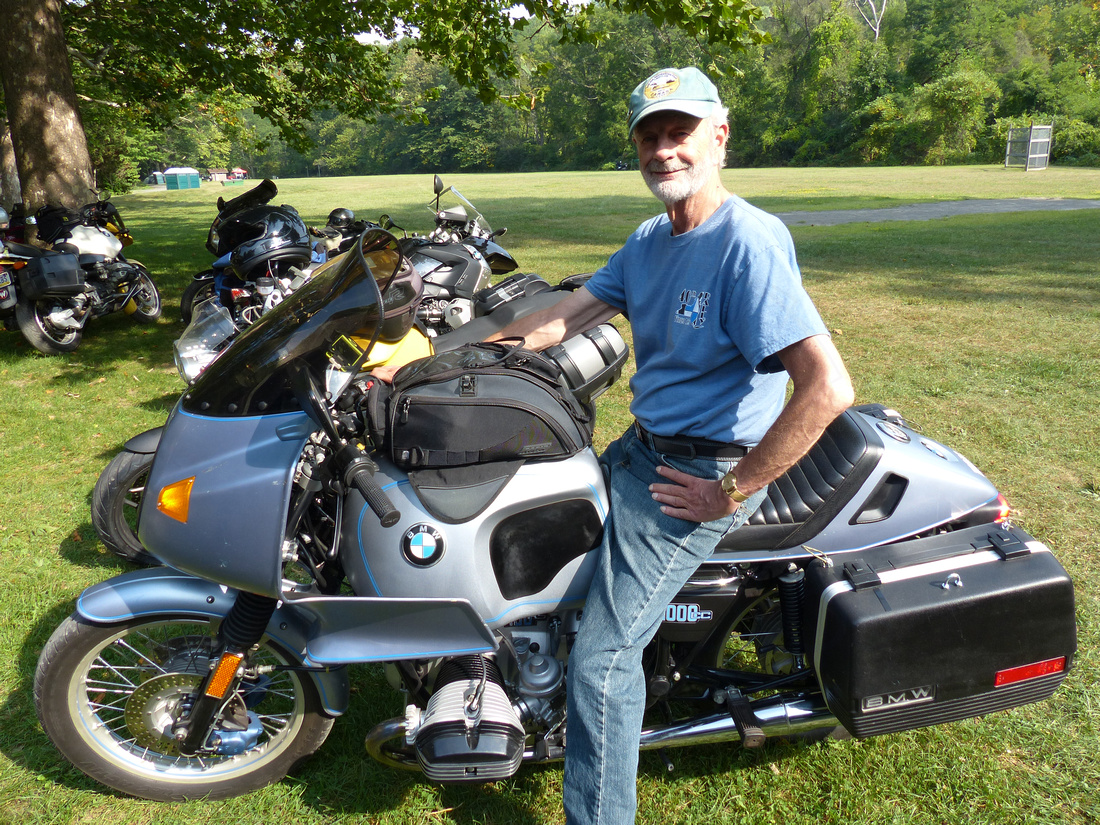 Norm & Leiser BlitzUncaNorm re-united with Leiser Blitz, what a joy that was to see. He was pleased with the effort we put into this machine!

Duplicate (at least visually) each of the five historic photos I received from Gretchen.  Most of these photos date back to 1978 - 1980. Dave Good was able to provide me with some particulars on these images. 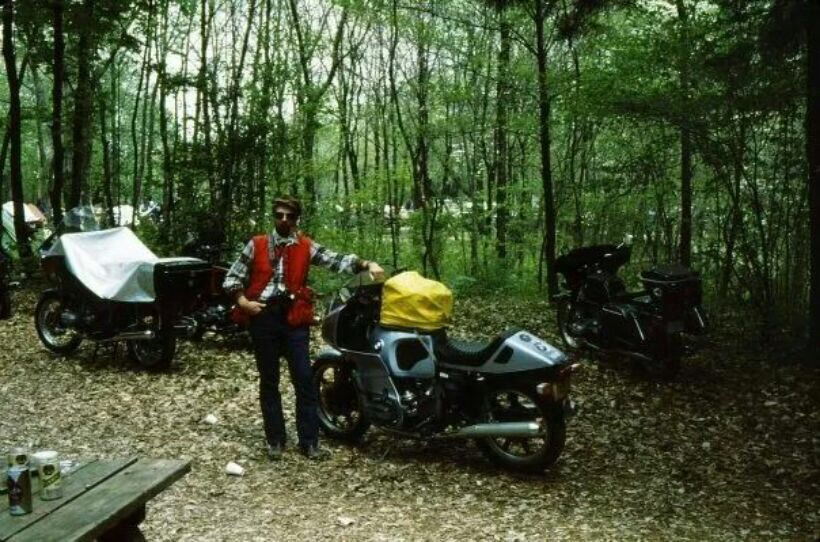 Cool facts: Gretchen took this photo!  The bike on the right belongs to RJ, the project lead and main builder/fabricator of my bike (now called "Wings"). In the foreground is my R77 "40" mug that Gretchen handmade. 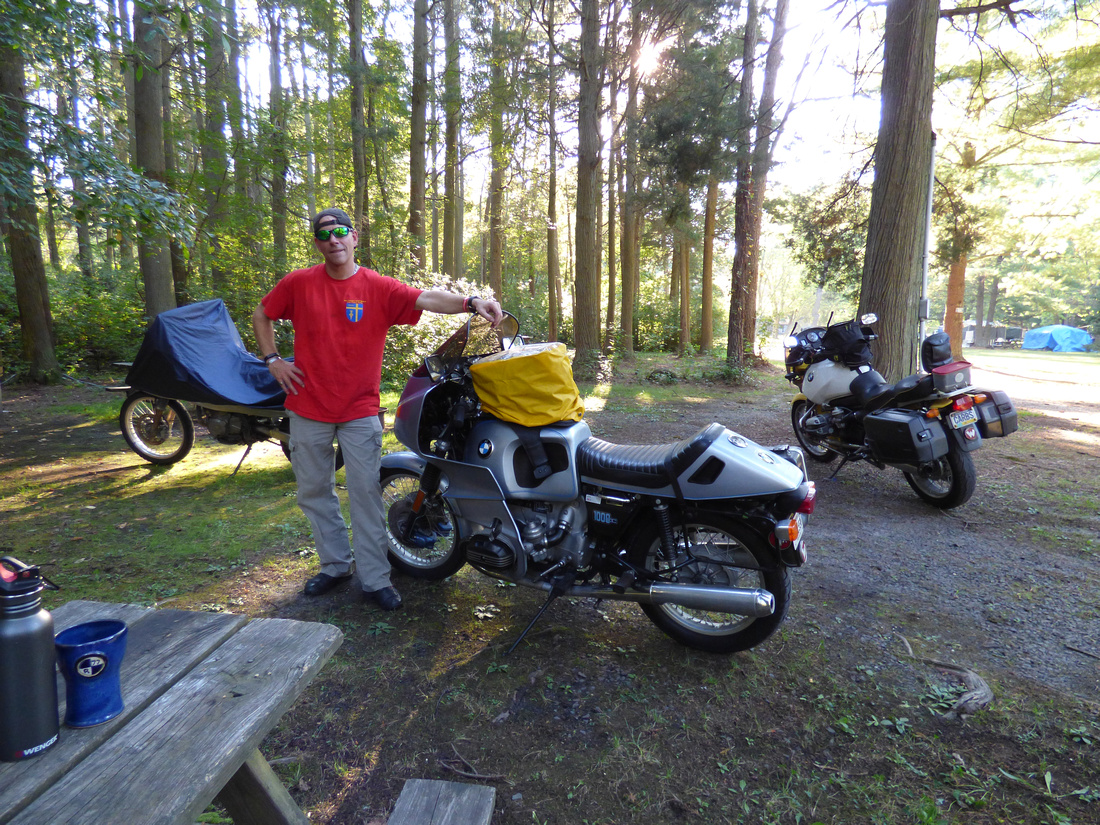 Re-enactorOur version of the previous image, which was taken in 1979. 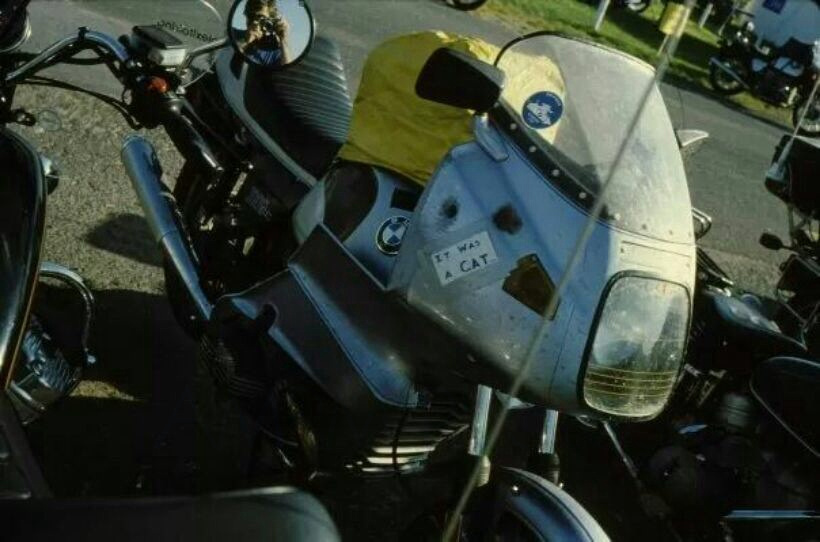 Cool facts:  The gentleman in the mirror (Dave Good) is the same person depicted in the original image above.  Dave and I have been great friends for years now. Another cool fact is that the mirror is attached to Gretchen's bike, this was her first ride to a rally!  Also, the funds she received from the sale of the R77 afforded her her current ride, a 1976 R90/6. 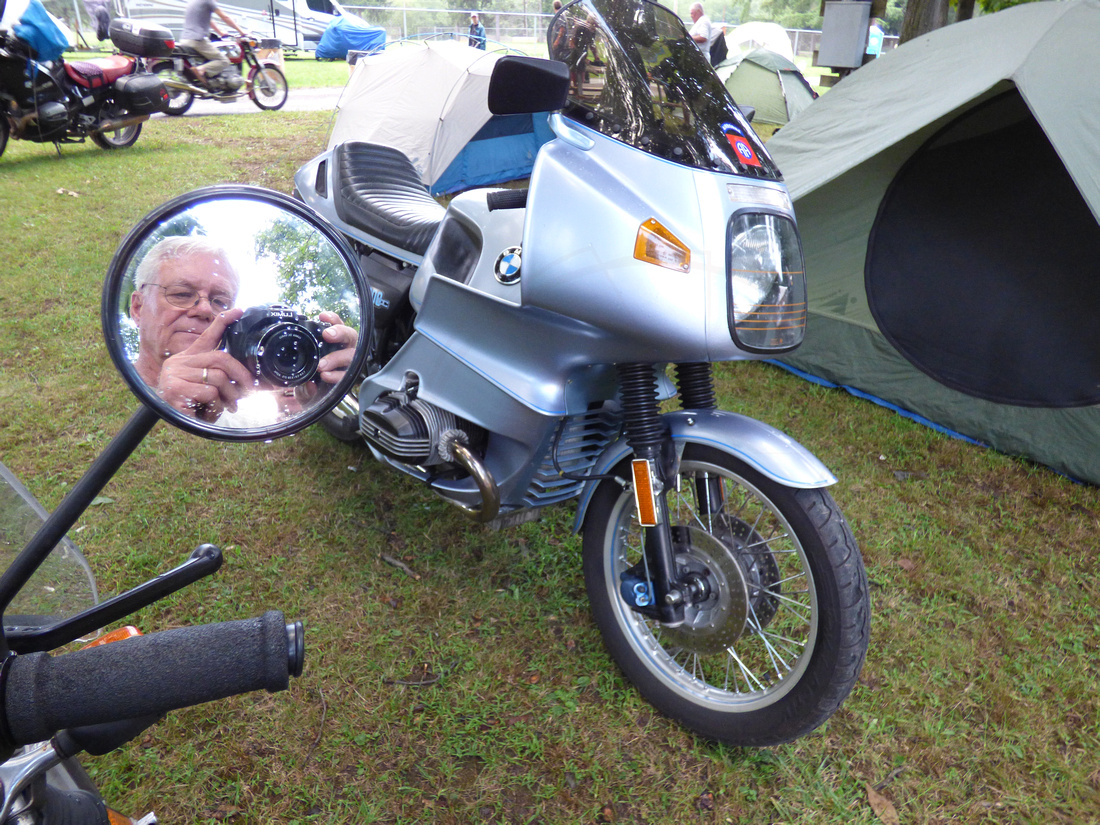 It Wasn't a CatDuplicating a few old rally pictures. Loving this!

The following images are yet to be duplicated - updates to follow, no idea when this was taken.  See if Gretchen can inquire. 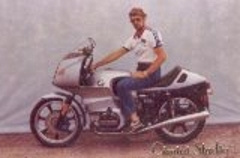 NormLB0Preumably one of the earlier shots of UncaNorm with Leiser Blitz 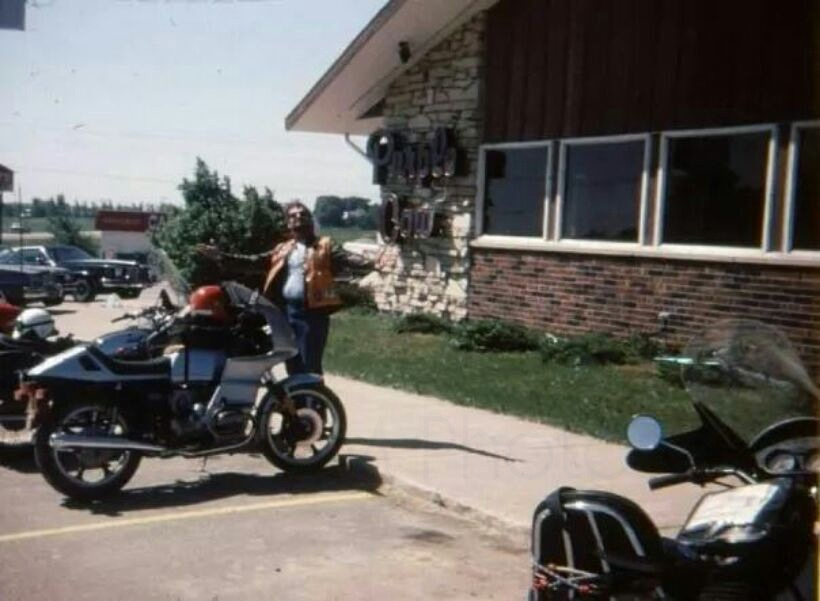 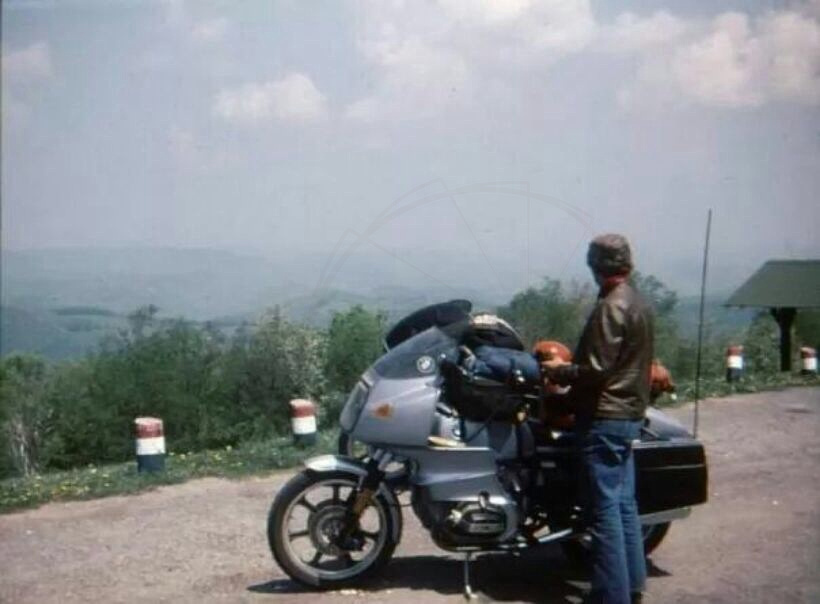