This weekend while looking through some old photos I decided to scan in a few of them and create a photo archive of all bikes I have ever owned. I might add a note here and there, it is amazing to see the correlation between the bikes I have owned and the people I then became acquainted with that certainly shaped my life or otherwise had a profound impact.

I remember having liked bikes ever since I was a young lad, growing up in Germany I enjoyed seeing motorcycles and the gear the riders wore, quite a difference then to my re-location to El Paso, TX, where you would see folks ride without helmets, in shorts and T-shirts.

My first bike.  My grandma essentially funded the purchase of this bike ($800), this was my main (and only) means of transport while I attended the University of Texas at El Paso.  Met another German rider named Peer Salden at UTEP, he rode a Yamaha XT500. We became good friends and went riding quite a bit.  He and I dissembled the Kawasaki engine and replaced some rocker arm shims.  Bike got trashed in I guess a pretty bad accident (I don't remember it), my buddy Aaron was riding bitch and thankfully wore my helmet. 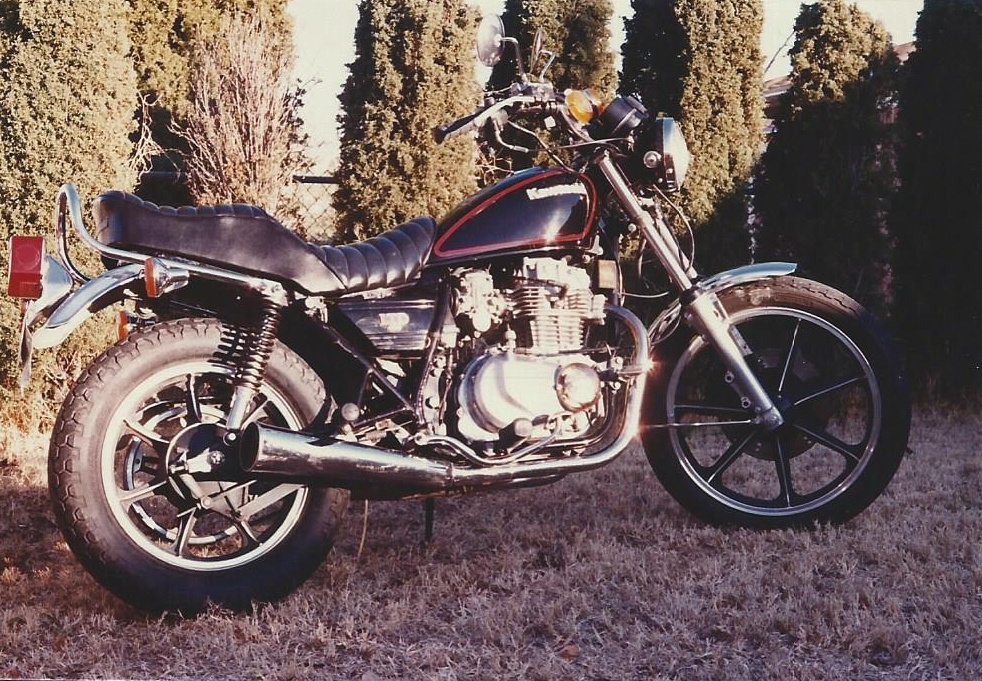 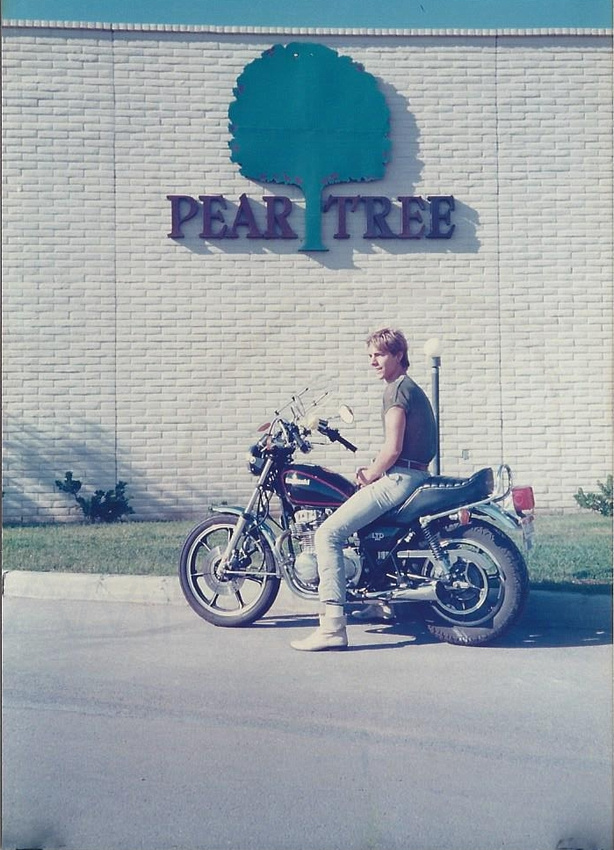 I guess I got this one to replace the LTD440.  Not a great bike, I remember that it had a torn diaphram in one carb which was such an easy fix, then it ran pretty well.  I think Peer was pleased I got this bike, he HATED the LTD.  I cannot re-collect whatever I did with this bike (or when/where I bought it). 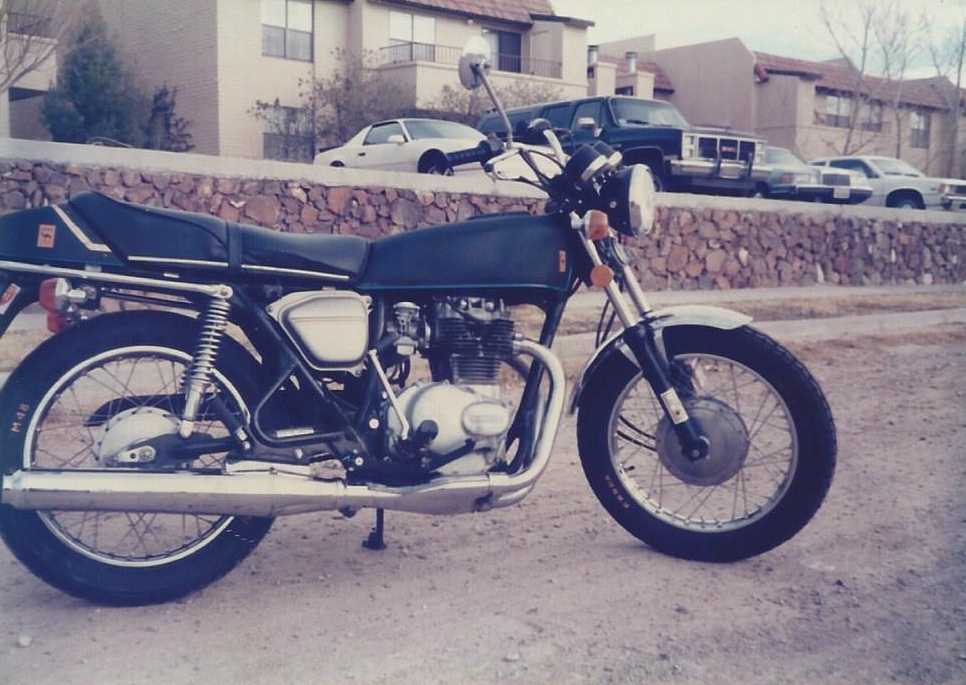 Only my third bike, this bike was quite cool, first bike I never should have sold. This was my daily rider while being stationed at Ft. Bragg, I lived off-base in Spring Lake, would ride this bike year around as I still did not own a car. 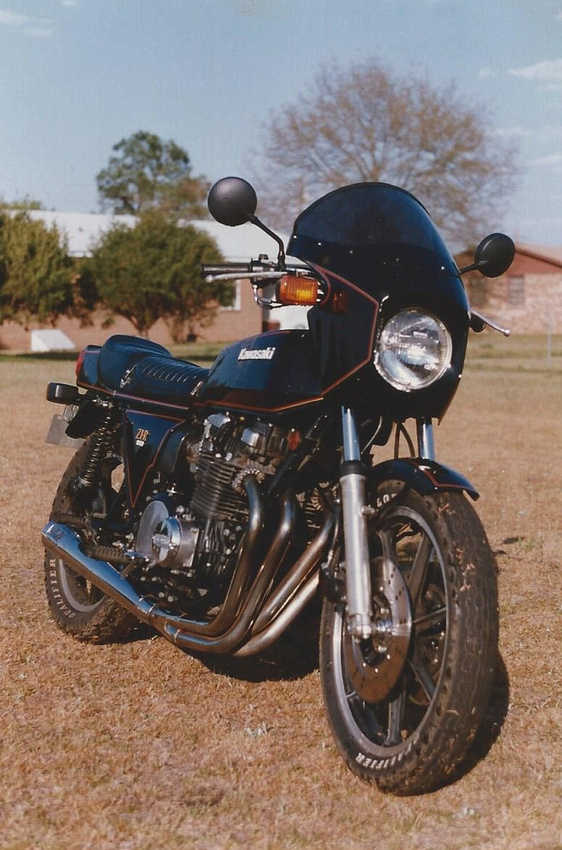 My first BMW.  And my last ...  This was the most dreadfully slow bike I ever owned.  I did not appreciate what makes an airhead an airhead, but heck I was young then.  This bike swore me off of BMW's for YEARS. 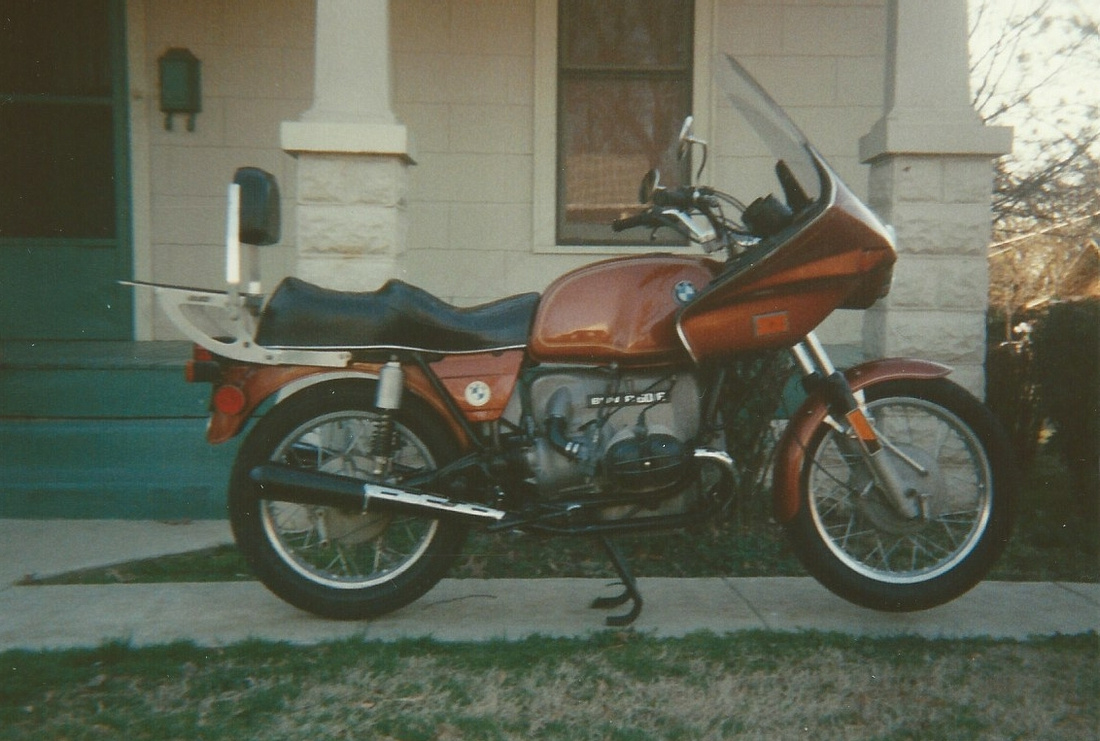 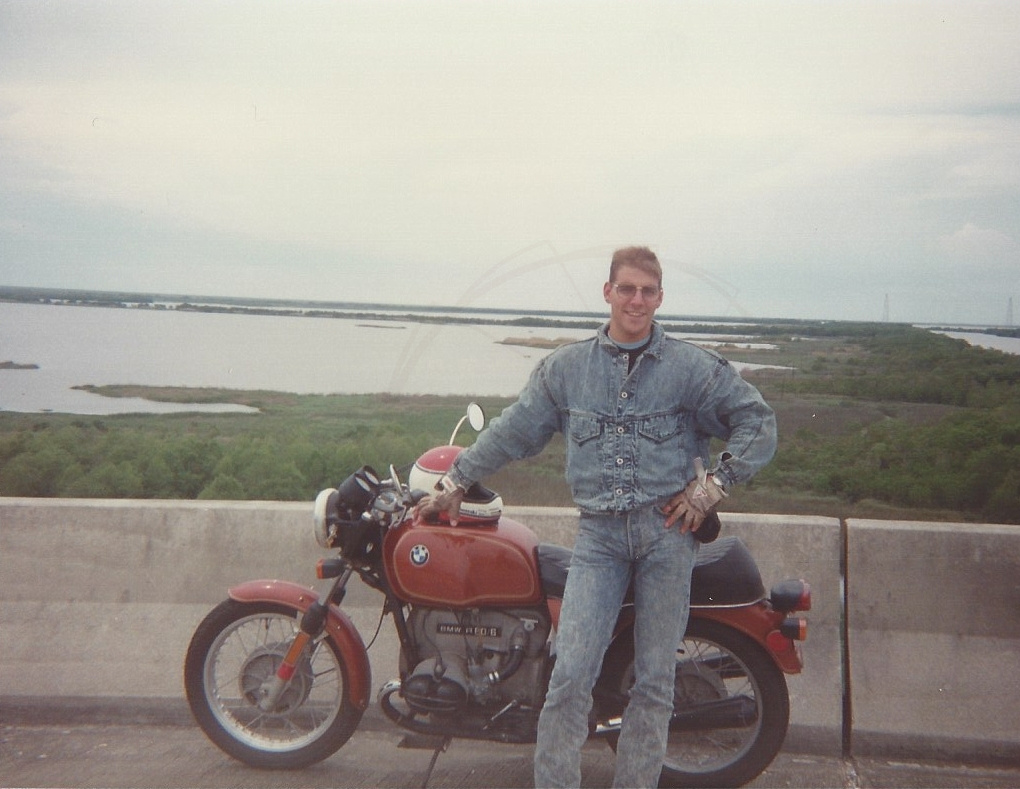 Don't really have much to say about this bike, this is the only picture I have of it. Don't really remember riding it.

The move to California prompted me to have to sell the Z1-R 1000, the BMW R60/6 and the KZ1000J because I needed a car. This was a bad move on my part, but lesson learnt.  The Z1-R I should have never sold, and now that I love airheads, the R60/6 might appeal to me again.  I bought a 1973 VW Super Beetle.  Finally after maybe six months or so, while living in San Diego my roommate Michael used to hijack my "Motorcyclist" magazine every time it was delivered.  We talked about bikes and motorcycling, he said he would like to try that.  So we found him a good starter bike (Yamaha Seca 550), went and looked at it, I test rode it, he purchased it and I rode it home for him.  Probably just being on a bike again got me excited about getting another one, so this is what I bought. 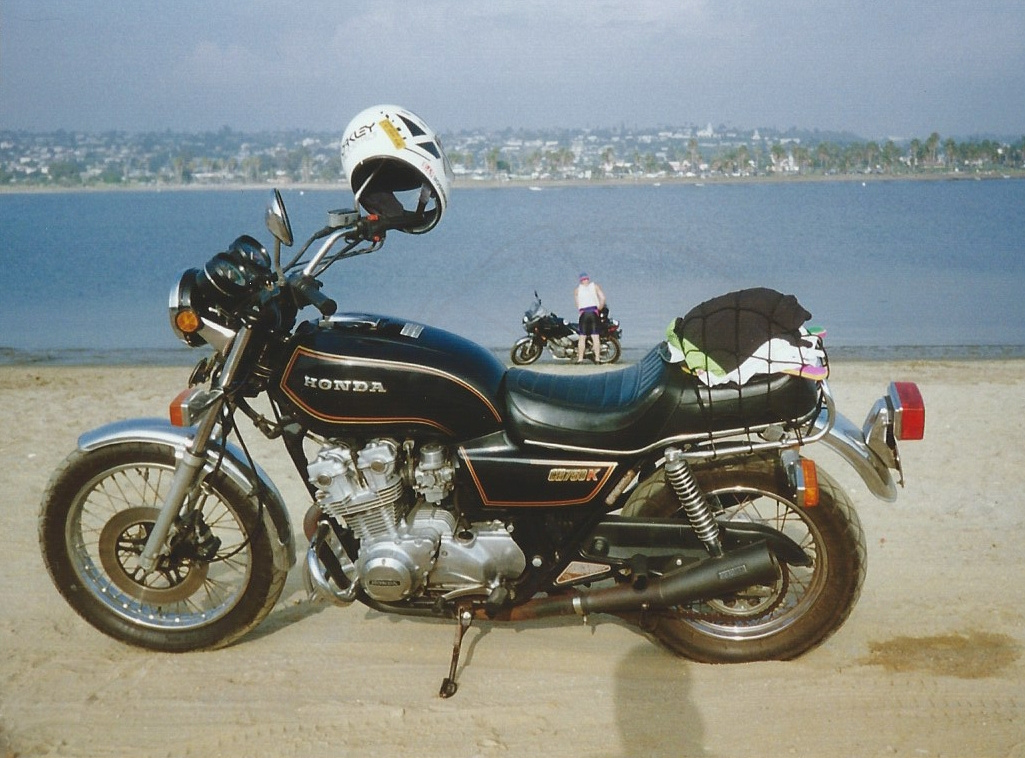 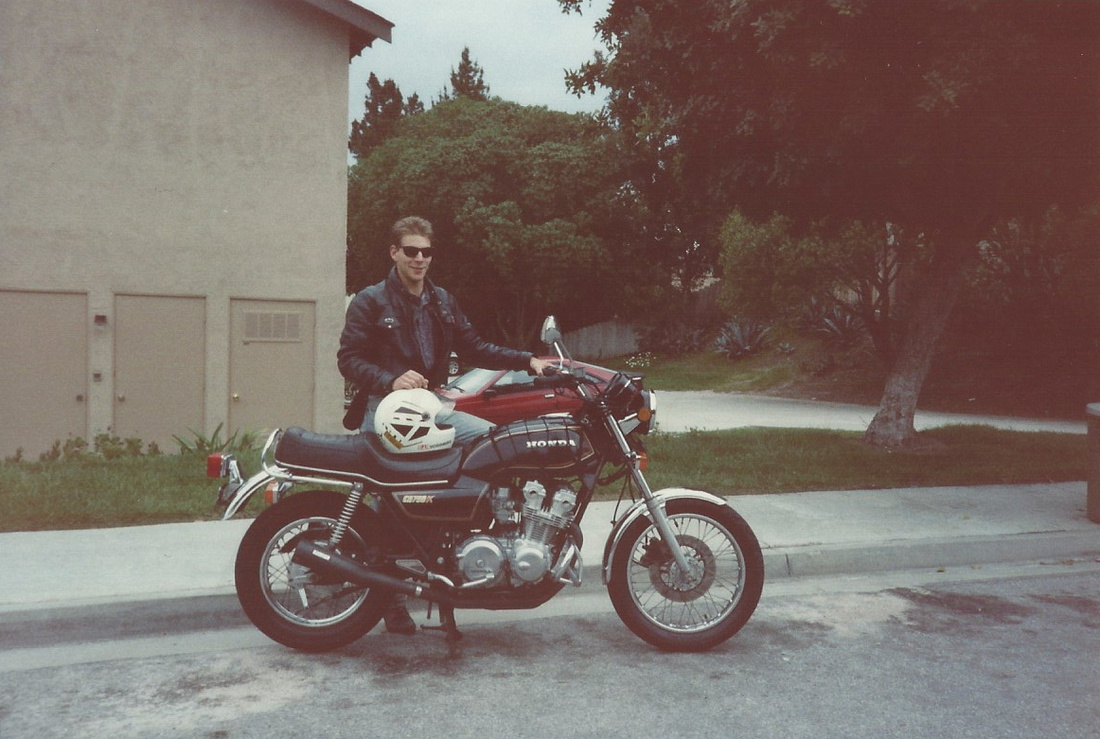 I sold the CB750K in 1992 before moving to the Washington DC area towards the end of 1992. I remained "bikeless" for probably a little over a year. My good friend John back in AR contacted me about his CX500Turbo being for sale and wanted to give me first dibs on it.  Before I knew it, I had a trailer hitch installed on my car, and was heading to AR with a borrowed trailer to get the bike. Finally riding again, I went for a few short trips here an there, and ended up meeting my good friend Jim (he had a CX500 Silverwing) through some motorcycle forum online. We met up for quite a few rides and I saw him accumulate a few bikes over the next few years. Through a good friend (Dave) from work, I was re-introduced to BMW's.  During our lunch hour he would tell me about these great BMW rallies he goes to, including some as far as Montana ...  Wow.  On occasion we would run to Bob's BMW for lunch, I absolutely fell in love with a BMWK1200RS.  Dave invited me to join him at the BMW Square Route Rally in Thurmont, MD for the day, this was my first BMW rally (I rode the CX500T), it is here where I met several other guys from the Dutch Country Riders and realized that I want to be part of this rallying, and want to do it on a BMW. 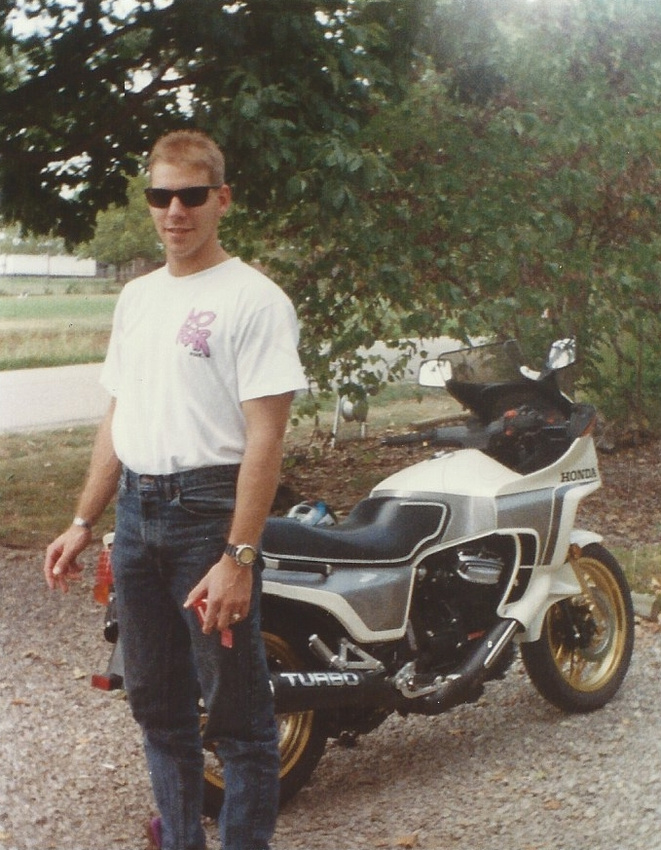 A very good friend and fellow rider took me to Bob's BMW for lunch and I instantly was hooked on the K1200RS (Yellow & Checkered Flag paint scheme). A subsequent visit had me look at the bike below, one year old dealer demo with 80mi, discounted by some $3000.  Couldn't say no, purchased the bike and ended up putting almost 55k miles on it before wadding it up.  This bike was simply put a great bike. Added a Russell Day-Long saddle, Remus Sport Exhaust, PIAA Aux. Driving Lights and a 5gal Fuel Cell.  She was a runner and took me to quite a few rally's and on many great rides.  Totaled in 2/8/2008. 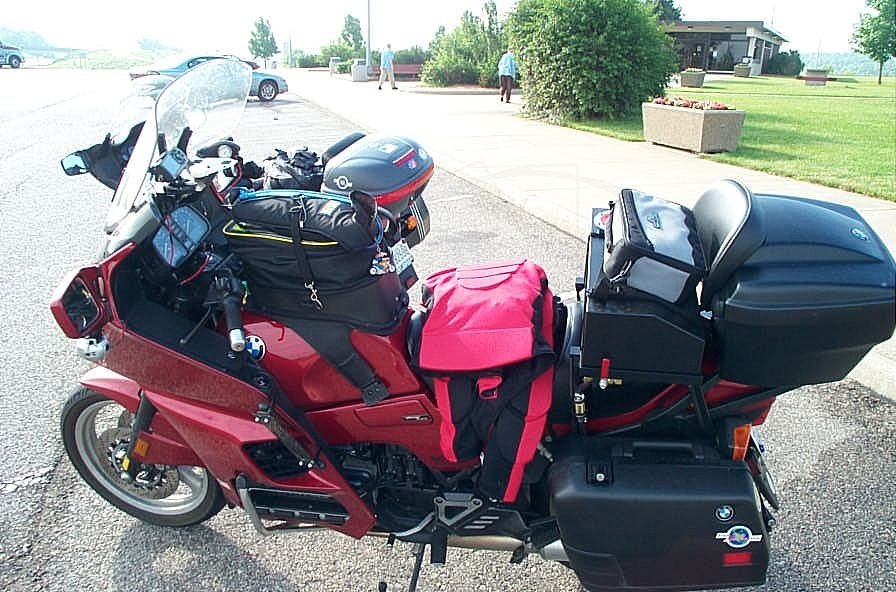 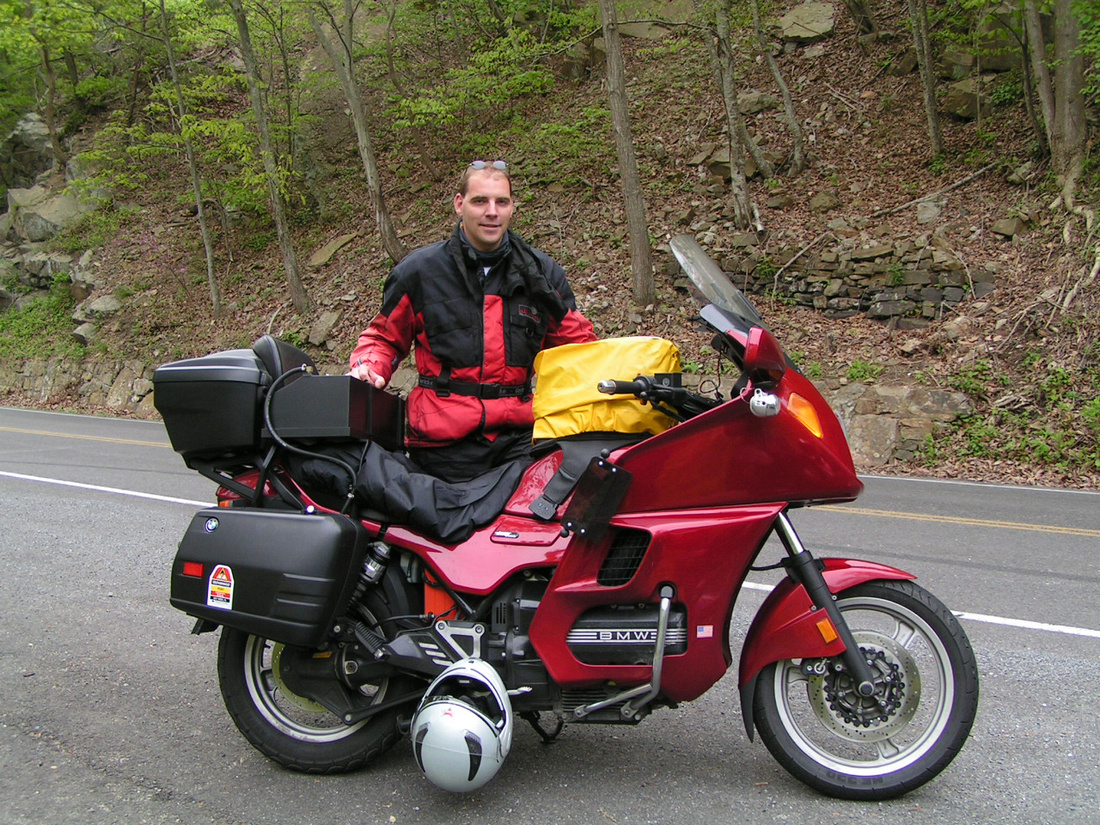 1997 BMW K1100LT, Fitted with external fuel cell to stretch the range a bit. Got my Iron Butt Plate riding the 1000 miles in 24 hours. Truly loved this bike, unfortunately was totaled in 2008 when an elderly lady pulled out right in front of me. 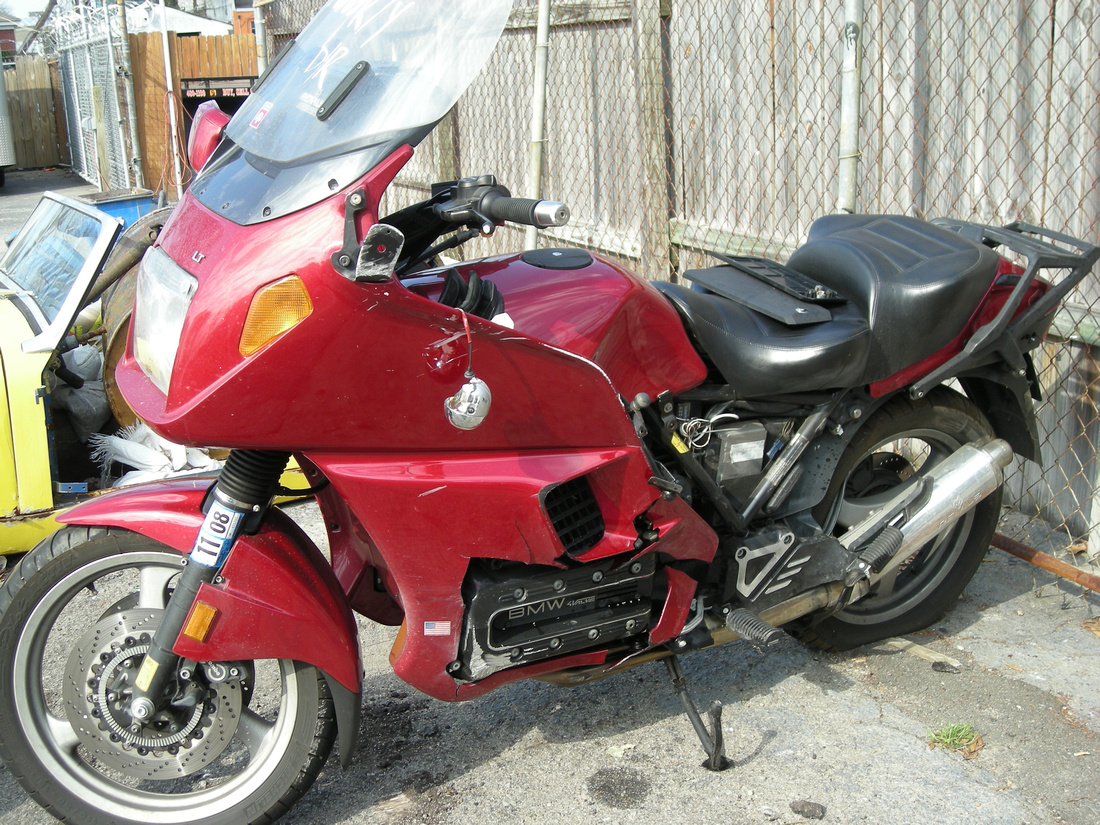 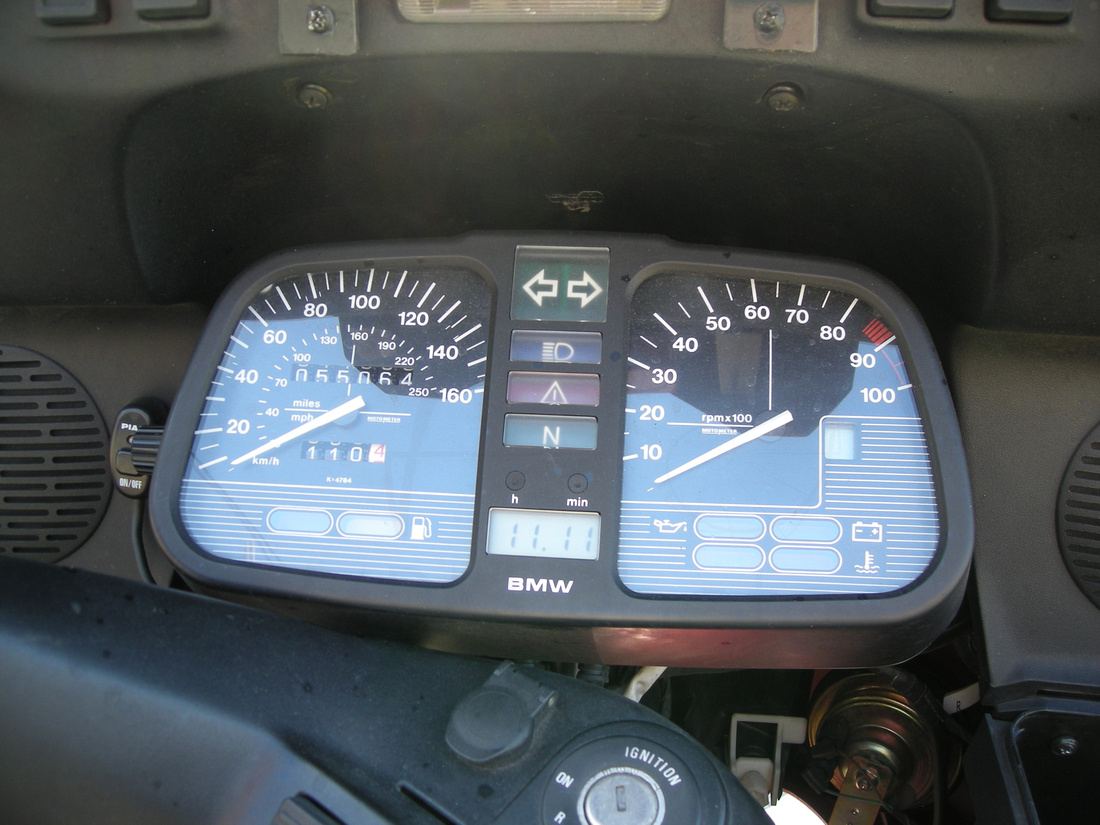 I decided not to get another bike until Aug/Sept 2008 or so. I healed up well from the accident and was beginning to strongly consider a BMW GS Adventure of some sort.  After more consideration and being that I tend to take longer hauls, I decided on a K1200LT instead.  In hindsight, a GS would have been a better fit, although the K1200LT served me well, and continues to do so. 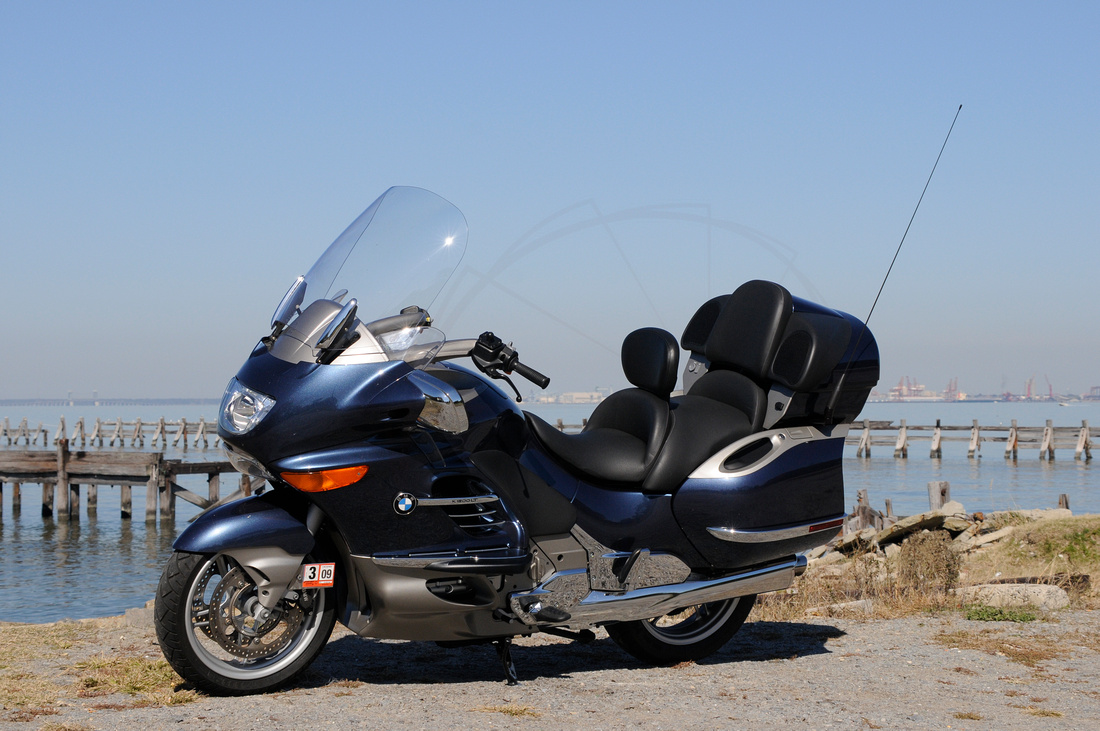 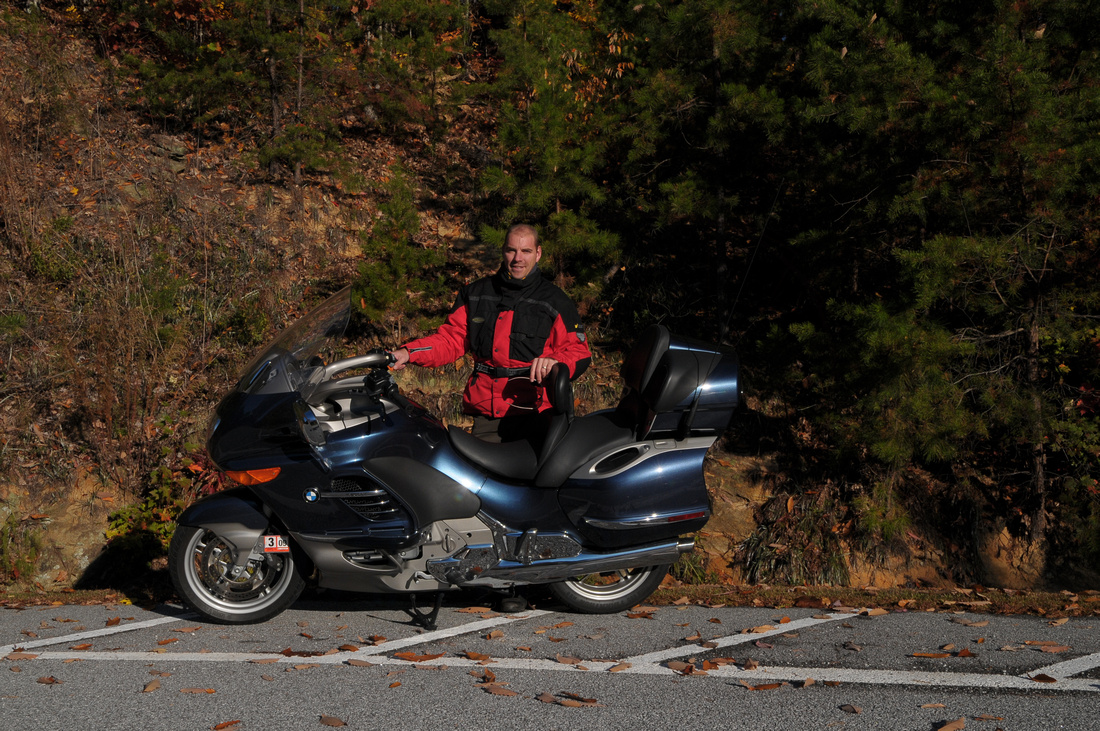 Going old school because "Old's Cool". First airhead since 1991, trying this again.  This time with a bike that needs a bit of help. What an adventure this turned out to be ... Too much to list here, but in a nutshell all I can say is that this is my favorite kike I have owned so far.