Thank you for your patience while we retrieve your images.

Created 28-Oct-12
Modified 31-Oct-12
Visitors 190
30 photos
The Lonaconing Silk Mill, owned by the Klotz Throwing Company for much of its life, is considered the last intact silk mill in the United States that has never been modernized. Located in Lonaconing, Maryland, the mill lies within the National Lonaconing Historic District, and was nominated to the National Trust for Historic Preservation’s list of America’s 11 Most Endangered Historic Places.

Completed in April 1907, the mill was a fixture in the early industrial town for fifty years. Throughout its turbulent history, the mill found itself facing unionization, the Great Depression and World War II – during which time the supply of raw silk, imported from Japan, was all but cut off. After switching to synthetic rayon, the Lonaconing Silk Mill prospered but only for a short duration. A lack of modern machinery and the threat of a strike forced the plant to consider closure. When workers balked at the lack of a pay increase and walked out, the mill shut its doors for good in 1957.

A silk throwing mill twisted or wound raw silk into thread, where it was then sent to be woven into various textiles by silk manufacturers. The silk, imported from Italy and later other countries, was first washed, dried and spun before being wound, or doubled, into skeins of thread.
Categories & Keywords
Category:Architecture and Structures
Subcategory:Buildings
Subcategory Detail:
Keywords:Allegany, Company, Crawford, Frostburg, Herb, Klots, Klotz, Lonaconing, MD, Maryland, Mill, Silk, Throwing, Western, abandoned, historic
Copyright © Andreas Mueller 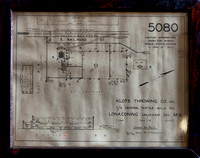